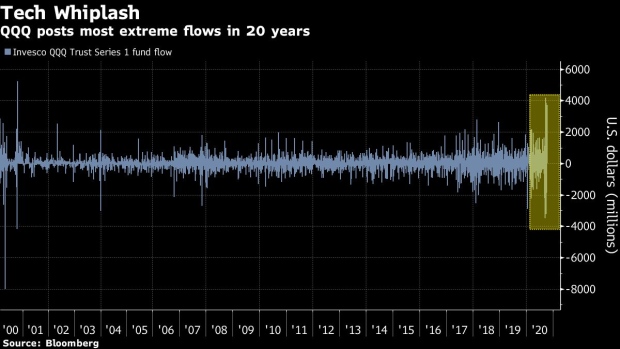 (Bloomberg) -- The amount of cash cycling through one of the world’s largest exchange-traded funds is turning heads across Wall Street.

The $146 billion Invesco QQQ Trust Series 1 (QQQ) ETF has seen an average of $1.5 billion per day in flows over the past month, according to data compiled by Bloomberg. The fund posted its biggest withdrawal in two decades in late September, followed by its largest influx in the same time period one day later. The ETF lured $3 billion the following week, ahead of a $3 billion exit the next day. This week brought another $3.7 billion inflow in a single day.

While QQQ is one of the most heavily traded ETFs on the market, the consistency and sheer magnitude of the mega-flows has analysts at odds over what’s driving them, given that they don’t appear to line up with any rebalancing schedule or model portfolio shifts. The recent uptick in options activity has spurred speculation that the ETF is being used as a hedging vehicle, while some say that renewed appetite among retail investors is fueling the flows. Others posit that the cash churn amounts to a massive tug-of-war over the outlook for technology shares, which have already rallied an astonishing 73% from March lows.

The massive cash movements may be a byproduct of building options appetite. Roughly 3.7 million options contracts tied to Apple Inc. traded on Tuesday, well above the stock’s 20-day average of 1.95 million. Call open interest in Facebook Inc., Amazon.com Inc., Netflix Inc., Alphabet Inc., Apple and Microsoft Corp. has averaged 12.9 million contracts over the 30 days through Friday, the highest since early 2019.

Typically, dealers selling call options will buy the underlying stock in order to hedge their position. However, given that the so-called FAANG group comprises nearly half of QQQ, buying the ETF works as a “quick and dirty hedge,” according to Steve Sosnick.

“This is where the concentration comes into play,” said Sosnick, chief strategist at Interactive Brokers. “It would not be surprising that dealers would find themselves hedging the huge call activity with QQQ -- especially when Facebook and Google followed along.”

Other see evidence of individual investors in the massive flows. Retail traders -- locked at home with little to do amid the pandemic -- have emerged as a force in 2020’s stock market rebound, enticed by the prospect of zero fees.

“Right along with the ‘Robinhoodies’, a few large players must be day trading -- such extreme moves aren’t from traditional investors,” said James Pillow, managing director at Moors & Cabot Inc.

There’s reason to think that day traders have migrated to riskier corners of the ETF universe. The ProShares UltraPro Short QQQ, a triple-leveraged fund that tracks the inverse performance of the Nasdaq 100, saw a record inflow of $239 million this week. Its twin, the ProShares UltraPro QQQ -- which offers three times the returns of the Nasdaq 100, posted a $285 million outflow.

“That tells me there is a lot of day trading going on related to the Nasdaq 100,” said Christian Fromhertz, chief executive officer of Tribeca Trade Group. “They’re super liquid and really move on Covid-related headlines.”

There’s also the possibility that the fund’s traffic is being fueled by investors trying to divine the future path of QQQ. Megacap tech shares have largely powered the stock market higher, buffeted by the “stay-at-home” trade amid the pandemic lockdowns.

However, the outlook is cloudy. Hedge funds and speculators built up the biggest net short position since 2006 in Nasdaq 100 futures at the end of last month, according to Commodity Futures Trading Commission data. While some of those positions have been covered, the latest data show that bearish sentiment is far from dissipated.

“There’s a battle between top callers and those who believe tech has further to run,” said Nate Geraci, president of the ETF Store. “The swings between massive inflows and outflows reflects that battle.”