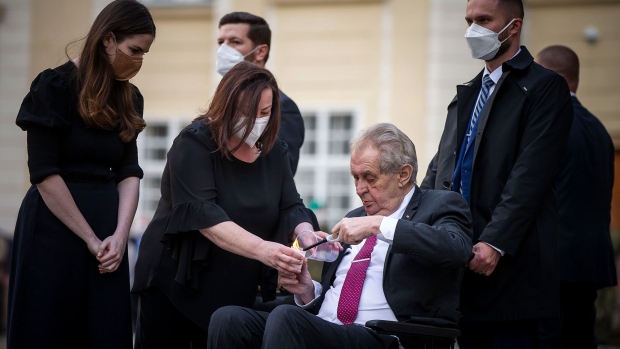 (Bloomberg) -- Czech politics have always carried the whiff of a Cold War spy novel and the recent political turmoil is a chapter out of that Soviet-era book. A leader is whisked off to hospital with a mysterious illness after a shock election didn’t go his way -- and the public is kept in the dark.

President Milos Zeman has been in intensive care Since Oct. 10, rushed there just one day after his prime minister ally, Andrej Babis, suffered the surprise ballot defeat. He alone, under the constitution, can decide who will lead the next government but he hasn’t been seen or heard from since that election weekend.

And for the first time since communism was toppled here in 1989 -- and in a highly unusual situation for a European Union and NATO member state -- there is almost no information on his state of health. Conspiracy theories are running amok. The central European nation of 10.7 million people is literally in limbo.

In this vacuum, lawmakers are moving to strip Zeman of his powers while his spokesman, former journalist Jiri Ovcacek, insists everything is fine with his formerly chain-smoking and hard-drinking boss.

According to him, Zeman is healthy enough to work and is closely following developments. The 77-year-old leader suffers from diabetes and neuropathy in his legs, a condition that has forced him to use a wheelchair. His staff last week issued a statement that Zeman appointed a judge only to later admit the nomination had been signed before the hospitalization.

In a widely-pilloried statement, Ovcacek said Zeman had asked for a book about Winston Churchill and ordered sausages for lunch. Zeman’s wife, dressed in black and wearing dark pearls, made a strange and rare public appearance asking the media to refrain from speculating on his condition.

“I can only confirm that he is undergoing treatment that will require time,” she said. “Most of all, I want my husband to recover.”

The maneuvers have turned the standard post-election process of creating a new government into a spectacle in which unelected officials from the president’s office are testing the country’s democratic checks and balances.

At the center is the chancellor of Zeman’s office, Vratislav Mynar, who opposition parties have criticized in the past for trying to influence judicial cases, withholding a clear declaration of his assets, and failing to receive top-level security access by the Czech intelligence services. Mynar denies any wrongdoing and dismisses the criticism as politically motivated.

“I’m not convinced that every step taken by the president’s office is being consulted with him, and that he agrees with all of them,” Milos Vystrcil, the leader of the upper house, said last week. “The president isn’t in good hands, regarding his colleagues.”

The controversy has kicked up a gear since the speaker of the lower house of parliament said he visited Zeman in the hospital on Oct. 14. He emerged with the information that the president had convened the chamber’s inaugural session -- on the same day that parliament would be required to meet even if Zeman hadn’t made the decision.

The unsanctioned visit angered Zeman’s doctors, who haven’t been authorized to speak about his health, and prompted them to call for tighter security. It also raised public suspicion.

The Senate then requested information directly from the hospital.

Controlled by parties opposing Zeman’s policies, the upper house used the response -- a general statement saying Zeman is ill and unable to work -- as grounds for initiating a procedure to relieve the president of his duties.

Such a motion would eventually take weeks, requiring approval from both legislative chambers and creating a period in which Zeman keeps all his powers. These include appointing judges, issuing amnesties and naming the central bank’s policy-making board.

At the same time, police are investigating potential “crimes against the republic.” They didn’t name any suspects, and won’t provide more details during the investigation.

Attention has turned to Mynar who, according to the parliament speaker, facilitated his hospital visit. Even Babis, called Mynar’s actions “unacceptable” and urged him to step down.

“The president of the republic is Milos Zeman, who named me to my post,” Mynar said on Tuesday. “He is the only one who has the right to dismiss me.”