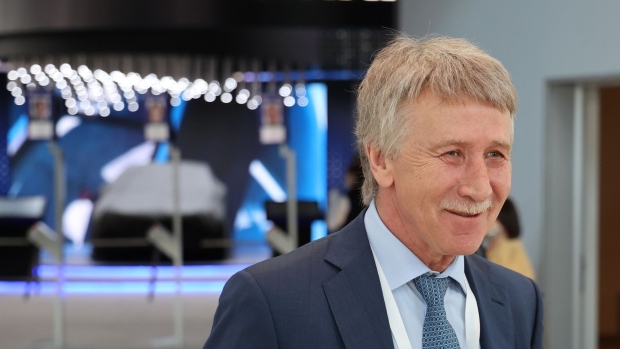 Leonid Mikhelson, billionaire and chief executive officer of Novatek PJSC, speaks to attendees between panel sessions on day two of the St. Petersburg International Economic Forum (SPIEF) in St. Petersburg, Russia, on Thursday, June 3, 2021. President Vladimir Putin will host Russia’s flagship investor showcase as he seeks to demonstrate its stuttering economy is back to business as usual despite continuing risks from Covid-19 and new waves of western sanctions. , Bloomberg

(Bloomberg) -- A $150 million superyacht tied to Leonid Mikhelson, Russia’s second richest-citizen whose gas company is a target of US sanctions, has stopped transmitting its location after last broadcasting it was headed to the Bahamas -- known for cooperating with other nations to seize ships.

The 85-meter (279 feet) long Pacific, which features room big enough for two helicopters, was last detected cruising at nearly full speed in the Carribean Sea before it went dark a little after 9 p.m. local time on May 8, according to vessel data compiled by Bloomberg.

If the Bahamas is its true destination, the yacht won’t find a safe haven there -- authorities in the island nation have worked closely with the US to seize commercial vessels. As Russia’s war in Ukraine drags on amid allegations of atrocities, the US and other governments around the world have looked to sanctions to punish those closest to President Vladimir Putin. Italy, Spain and other European governments have seized villas, bank accounts and more than a dozen yachts belonging to Russia’s wealthiest citizens.

“It’s inconceivable that Russian oligarchs would consider the Bahamas a safe jurisdiction given its close ties to the United States -- not just in terms of location but in terms of its law enforcement cooperation,” said Ian Ralby, chief executive of I.R. Consilium, a maritime law and security consultancy. “It’s very puzzling that a vessel likely to experience sanctions enforcement would risk turning up in the Bahamas, but it’s more likely it will turn up somewhere else nearby that’s more friendly to Russian interests like Cuba or Venezuela.”

Two of Genting Hong Kong Ltd.’s Crystal Cruises ships that were the focus of a suit over unpaid fuel bills were seized in Freeport in the Bahamas in February, after a US judge issued an arrest warrant for the vessels.

The Pacific had been anchored at various ports and bays in Costa Rica since late January. It departed the Papagayo marina near Culebra Bay on May 5 and headed southeast, passing through the Panama Canal, according to Bloomberg data. The superyacht was last spotted cruising at 15.8 knots in the Carribean Sea northeast of Colon and indicated Nassau in the Bahamas as its destination before its location transponder was turned off. It has stopped broadcasting its location since May 8, in violation of international maritime law.

Watch a video of the Pacific here: https://www.youtube.com/watch?v=PV0f_DJHRZE

Mikhelson, the world’s 45th richest person with a fortune of nearly $26 billion, was sanctioned by the UK and Canada in early April. He’s chief executive officer of Novatek, the largest non-state-owned natural gas provider in Russia. The company is currently on the US sanctions list, though Mikhelson himself doesn’t face US sanctions. The billionaire owns about one-quarter of the publicly traded company, which produces about 10% of the country’s gas.

Representatives for Mikhelson at Novatek couldn’t immediately be reached for comment.

It’s unclear if Novatek has any interests or assets tied to the Pacific yacht. Still, “every oligarch should be on notice that they are under intense scrutiny,” said Ralby.

With the help of Fiji authorities, the US earlier this month seized the $325 million Amadea vessel that the US claims belongs to billionaire Suleiman Kerimov, as it issued a warning to other oligarchs that there’s “no hiding place” for their assets.

The seizures have sent luxury vessels racing across oceans to locales that aren’t as likely to impose or enforce sanctions. Working with Spire Global Inc., an analytics firm that uses nanosatellites to collect data, Bloomberg News has been tracking the megayachts connected to Russians tycoons on sanctions lists.

Want to interact with a tracker of yachts tied to sanctioned Russians? You can here: https://insights.spire.com/maritime/sanctioned-russian-tycoons-yacht-tracker

The Pacific megayacht was built in 2010 by luxury yacht builder Luerssen, according to vessel data compiled by Bloomberg. The ship, which features an elevator, pool and smaller speedboat, has room for 12 guests and 28 crew members.