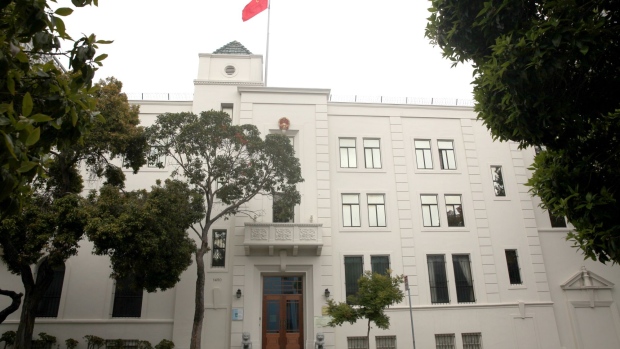 SAN FRANCISCO, CALIFORNIA - JULY 24: A view of the Consulate General of China on July 24, 2020 in San Francisco, California. Juan Tang, a researcher at the University of California, Davis who took refuge in the Chinese consulate in San Francisco, was arrested for allegedly lying to investigators about her Chinese military service. (Photo by Justin Sullivan/Getty Images) , Photographer: Justin Sullivan/Getty Images North America

(Bloomberg) -- A Chinese researcher jailed in California is on the cusp of being released because an anonymous benefactor stepped up to post bail and offered to house her.Her case was also helped by the judge handling her case, who on Thursday rejected prosecutors’ argument that she’s part of a “grand conspiracy” of international espionage.The latest curious twist in the case of a scholar who spent weeks holed up in the Chinese consulate in San Francisco before she was arrested came in a phone conference in Sacramento federal court. A lawyer identified only as “Mr. C” told the judge he’s willing to post $500,000 home equity to secure a bond that would allow Juan Tang to be freed on bail. Her imprisonment on charges of visa fraud and concealing her military service have helped fuel tension between China and the U.S.U.S. Magistrate Judge Kendall J. Newman told Mr. C he was “astounded” that he’d risk his family’s well-being for someone he’d never spoken to or seen before Thursday.“I want to make sure that they realize, and Dr. Tang realizes, that if she takes off, they’re screwed -- they’re going to lose their home,” Newman said. The judge said he’s inclined to grant Tang’s release if Mr. C agrees to post $750,000, telling him to think it over and return to court Friday.

U.S. prosecutors had argued against granting her bail, saying if she’s freed, the Chinese government might help her escape. She was denied bail because she didn’t offer any secured bond.

Read more: Chinese researcher is denied bail.Newman said his decision had as much to do with his doubts about the U.S. government’s allegations as the terms of the bail. Tang, 37, is being held in county jail in Sacramento, near where she did cancer research at University of California at Davis. She is among Chinese scholar visa holders in more than 25 American cities who the Justice Department suspects of having an “undeclared affiliation” with the Chinese military.Tang, like other Chinese scientists and academics recently accused of lying about their military service, is charged with visa fraud -- not espionage. According to the U.S., she could get 16 months for the violation. Newman said the Covid-19 pandemic has slowed trials and that he is reluctant to keep Tang locked up when she might end up serving more time in prison fighting her case than a conviction might earn her.“There’s an allegation that there’s a grand conspiracy,” Newman said, referring to Tang’s case and other similar prosecutions. “There are strong implications expressed by the government that Dr. Tang was involved in espionage, however she’s not charged with espionage.”The case is U.S. v. Juan, 20-cr-00134, U.S. District Court, Eastern District of California (Sacramento).