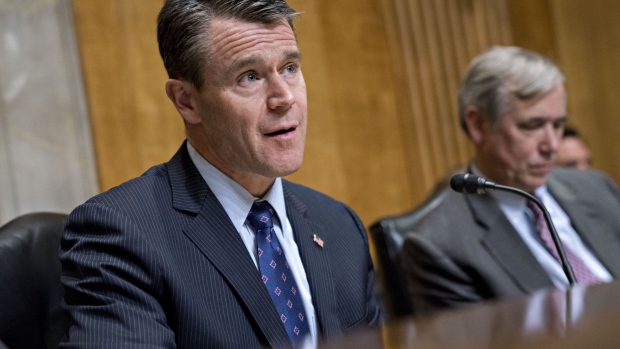 (Bloomberg) -- Saudi Crown Prince Mohammed bin Salman had a trusted enforcer inside the Royal Court until the murder of columnist Jamal Khashoggi nearly a year ago.

In the wake of that killing, Saud al-Qahtani disappeared and quietly ended his role in the day-to-day management of the prince’s affairs. But after months of chatter in diplomatic circles and on social media about whether he was still working behind the scenes for his patron -- his name resurfaced in recent days in speculation about whether he was dead.

Oslo-based Saudi critic Iyad el-Baghdadi, citing sources he didn’t identify, said that al-Qahtani may have been fatally poisoned. The Saudi government never commented on his alleged death and the country’s embassy in Washington declined to comment. But two people familiar with al-Qahtani said he’s alive.

The poisoning speculation renewed interest in a man feared by many in the kingdom and considered a fall guy by some for an ambitious crown prince set on controlling OPEC’s largest producer at any cost -- and intolerant of dissent that embarrasses the de facto ruler. Al-Qahtani, who the U.S. sanctioned for his alleged role in the Khashoggi killing, was one of the masterminds behind a broader effort to silence dissenters.

While the kingdom has said 11 Saudi citizens are being tried for the killing of Khashoggi inside the country’s Istanbul consulate, it’s never said what happened to the late columnist’s body is and it has vehemently denied the crown prince ordered or knew of the killing in advance. That response has done little to quash outrage over the killing.

“Saudi Arabia certainly has not done enough to address Khashoggi’s murder,” said Paul Pillar, a former U.S. Central Intelligence Agency officer who’s now a non-resident senior fellow at Georgetown University. “If al-Qahtani has met his downfall as a result of his part in the Khashoggi affair, this also exemplifies how the more a regime moves toward one-man rule, the more vulnerable even influential advisers are to being sacrificed for the sake of the one man at the top.”

During a meeting with two U.S. senators last week, the crown prince took “personal ownership as the leader of the country” for Khashoggi’s killing, according to Indiana Republican Senator Todd Young, who said he and Senator Angus King of Maine spent an hour with Prince Mohammed, who’s widely known as MBS.

“He assured me and Senator King that justice would come to those 11 individuals who have been identified as being potentially responsible for killing Jamal Khashoggi,” Young said.

But those types of statements have been met with disbelief outside the country.

After he was reported missing, Saudi officials initially said Khashoggi left the Istanbul consulate on his own, then claimed he died in an interrogation gone awry. A stream of leaks from Turkish intelligence officials repeatedly undermined the Saudi attempts to explain away the death.

Almost a year later, Khashoggi’s murder still haunts the kingdom. It has hurt historical ties with the U.S. at a time when President Donald Trump has sought to make the country the centerpiece of his Middle East strategy. It led to a condemning report by a special United Nations investigator that put the blame squarely on the crown prince and al-Qahtani. It’s also having an impact on ties with a key regional ally, the United Arab Emirates, according to analysts.

Until the fallout from the Khashoggi murder, there were only a few advisers as close to the crown prince as al-Qahtani, who Saudi-based Arab News says is 41 years old. When foreign journalists interviewed the prince, he sat nearby, watching quietly with an of air of confidence.

A former Saudi Air Force sergeant with a degree in law, al-Qahtani quickly ascended in the royal court to become general supervisor of the Center for Studies and Media Affairs. As media czar he, led the government’s efforts to monitor local journalists and Twitter personalities and helped create a “blacklist” hashtag urging Saudis to name and shame “mercenaries” who’d taken neighboring Qatar’s side in a Persian Gulf feud.

That effort didn’t last long. A year later, Mohammed replaced his cousin as crown prince in an abrupt shakeup that left no doubt about how succession plans would unfold following the reign of King Salman.

Prince Mohammed’s ascension, with the support of al-Qahtani, ushered in a more robust foreign policy line. The crown prince led the war effort in Yemen against rebels -- a continuing conflict that has been called a humanitarian disaster -- and was even more hostile toward Iran. The government also cracked down on internal dissent, throwing conservative clerics and female activists into jail even as it began pitching an image of moderation to the wider world.

Al-Qahtani’s swift rise and fall represents the unbridled ambitions of what has become a more aggressive style of leadership in Saudi Arabia. Analysts who follow the kingdom say previous monarchs, while holding absolute power, generally ruled by consensus among the princes and did so without the level of intimidation seen in today’s Saudi Arabia.

“Al-Qahtani represented a younger generation of Saudis who picked up on the attraction and importance of Saudi nationalism,” said Theodore Karasik, a senior analyst at Gulf State Analytics in Washington. “Al-Qahtani was part of an aggressive and youthful vanguard developing under the crown prince.”

Prince Mohammed unveiled an economic blueprint that sought to ditch a model based on state handouts of oil cash and to build a new private sector. He worked to court American executives who could potentially help him meet his goals. But Khashoggi’s killing last October put the crown prince and his kingdom under a microscope.

In the Middle East, the murder underscored concerns of many leaders about the brash crown prince, and ardent loyalists like al-Qahtani. The U.A.E. is now scaling back its military involvement in the Saudi-led coalition in Yemen partly because of that episode, according to Michael Knights, a senior fellow at the Washington Institute.

The climate worsened this year when Agnes Callamard, an expert on extrajudicial executions in the office of the United Nations High Commissioner for Human Rights, recommended further investigation into Prince Mohammed and al-Qahtani over Khashoggi’s murder. She called the murder a “state killing” that should prompt world leaders to reconsider having the Group of 20 summit in Riyadh next year.

“The regime has never come completely clean about the case,” Pillar said. “Its handling of the matter has been designed not to serve justice but instead to protect MBS.”

Al-Qahtani built his career on offering that protection, whether through public propaganda or quiet intimidation. His fate may ultimately hinge on whether he’s able been to keep doing that for Saudi Arabia’s future monarch from behind the scenes, or has become too much of a liability for the kingdom to bear.

--With assistance from Daniel Flatley.

To contact the reporter on this story: Glen Carey in Washington at gcarey8@bloomberg.net

To contact the editors responsible for this story: Bill Faries at wfaries@bloomberg.net, John Harney