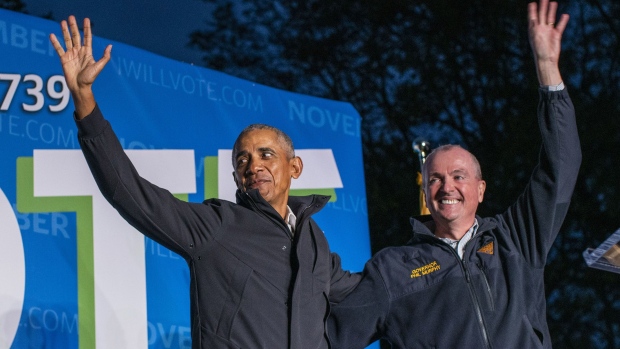 (Bloomberg) -- Spending on the New Jersey governor’s race has reached $76 million, up 31% from the last filing deadline on Oct. 6, according to the state’s Election Law Enforcement Commission.

Incumbent Governor Phil Murphy, a first-term Democrat, has raised $16 million ahead of the Nov. 2 election, while Republican challenger Jack Ciattarelli has raised $13.1 million. Both candidates have spent more than $12 million, leaving Murphy with $3.5 million and Ciattarelli with about $685,000 in the final days of the race.

Ciattarelli, a former assemblyman, has had more fundraising success than other recent challengers, Jeff Brindle, the commission’s executive director, said Monday in a statement. Ciattarelli has raised more public matching funds than former Republican Governor Chris Christie did in 2009 when he ousted Democrat Governor Jon Corzine.

Public matching funds are adjusted every four years to account for inflation. A maximum of $10.5 million is available for each candidate in 2021, compared with $9.3 million in 2017.

Spending on the race also is higher because of money from independent groups that don’t have to disclose their donors. In the past week, independent committees spent more than $7.2 million. Total spending by those groups is $20.9 million, about double what it was in 2017, Brindle said.

New Jersey and Virginia are the only U.S. states holding races for governor this year. Potential wins by Murphy and former Virginia Governor Terry McAuliffe could provide early indicators of how Democrats will fare in the 2022 midterm elections.

“With just two governor seats in play this year here and in Virginia, and the seeming tightening of polls in New Jersey, both parties seem to be viewing this as a high stake’s race,” Brindle said.