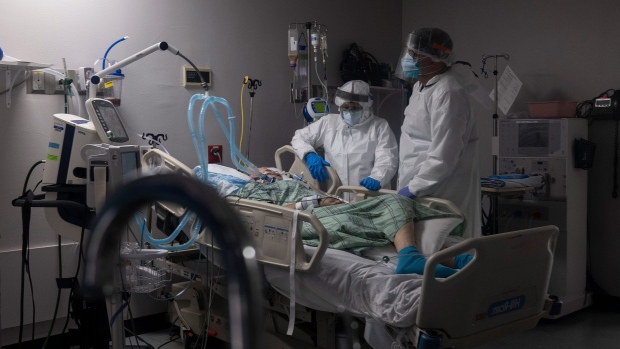 HOUSTON, TX - JULY 28: (EDITORIAL USE ONLY) Members of the medical staff treat a patient in the COVID-19 intensive care unit at the United Memorial Medical Center on July 28, 2020 in Houston, Texas. COVID-19 cases and hospitalizations have spiked since Texas reopened, pushing intensive-care units to full capacity and sparking concerns about a surge in fatalities as the virus spreads. (Photo by Go Nakamura/Getty Images) , Photographer: Go Nakamura/Getty Images

Deaths in Florida hit a record for a fourth straight day. New Jersey is in a “dangerous place” as the transmission rate jumped because of lack of compliance with anti-virus measures, the governor said. California’s fatalities dropped. Hurricane Isaias may complicate efforts to contain the virus.

The U.S. will provide as much as $2.1 billion in funding to vaccine partners Sanofi and GlaxoSmithKline Plc, its biggest investment yet. The European Commission said the drugmakers are set to provide 300 million doses for member countries.

For the U.K., which tightened lockdown rules for more than 4 million people across a large part of northern England, restrictions are likely to remain part of daily life. Spain and France led the euro-area into a record economic contraction.

Texas confirmed 8,839 more virus cases, bringing the state’s total to 420,946. The number of new cases has gradually subsided over the past two weeks from highs of more than 10,000 a day in mid-July.

But as the slowing in new cases has eased pressure on hospitals, daily deaths hit record highs of more than 300 a day on Wednesday and Thursday. Deaths reported Friday fell just below that benchmark, with another 295 fatalities bringing the total in Texas to 6,569.

California, home to the most U.S. cases, reported its first death of a minor from Covid-19. The person was a teenager in the Central Valley who had underlying health conditions, the state’s health department said in a statement. There have been no deaths among younger children from the virus, the department said.

California on Friday surpassed 9,000 deaths from the virus. The Central Valley, a largely agricultural region, is experiencing a rapidly growing outbreak, prompting Governor Gavin Newsom to send $52 million in funds to the area this week to help fight the crisis.

North Carolina Governor Roy Cooper called combination of Hurricane Isaias and the state’s spiking virus outbreak “double trouble” and has made plans to prevent any evacuations from worsening the infection’s spread.

“Because of our ongoing battle with Covid-19, people needing a shelter will be screened for symptoms and given personal protective equipment like masks at the shelter,” he said in a tweet. “If someone has symptoms, the state has different sheltering options available where it’s easier to isolate.”

North Carolina reached near records of deaths and infections over the past week. Cooper declared a state of emergency as Hurricane Isaias was predicted to near the coast of Florida, also hard hit by Covid-19, likely by Saturday. Cooper said the latest projection is that the storm could reach North Carolina by Monday.

Coronavirus cases in the U.S. increased 0.5% at 11:04 a.m. compared with the same time Thursday to 4.5 million, according to data collected by Johns Hopkins University and Bloomberg News. The increase was below the average 1.6% daily gain over the past week. Deaths rose 0.3% to 152,074.

The state, which has seen cases more than double in July, reported other positive trends. Hospitalizations, at a record last week, dipped 1.8% Thursday, while the number of intensive-care patients dropped 1.3%. The 14-day average rate of positive tests fell from 7.5% to 7.2%, the lowest in two weeks.

Italy registered 379 new coronavirus cases on Friday, in line with Thursday when infections jumped the most since early June.

Driving the increase is the Veneto region after more than a hundred migrants in a welcome center in Treviso tested positive. Veneto reported 117 new cases Friday after 112 Thursday, but Governor Luca Zaia said the outbreak is under control and that there is no emergency.

New Jersey’s virus transmission rate jumped to 1.35 after Governor Phil Murphy warned of rising cases due to a lack of compliance with mask and social distancing rules.

The state, Murphy said, was in “a very dangerous place.”

A transmission rate above 1 means that the virus is spreading. New Jersey had been as low as 0.62 in recent weeks. The state reported 699 positive cases in the past 24 hours, an increase of 0.4%, higher than the recent average.

Namibia will reopen its borders to visitors next week to revive the nation’s tourism industry, President Hage Geingob said.

Tourists won’t be subjected to a mandatory quarantine, but will be required to remain at their first initial destination for seven days. If a test given in that period is negative, visitors will be free to travel elsewhere, the president said.

The southwest African nation has recorded 2,129 coronavirus cases and 10 virus-related deaths. The tourism sector in Namibia, which began closing its borders in March, employs more than 100,000 people.

Merck & Co. plans to begin two large clinical trials in September of an experimental oral antiviral therapy for Covid-19, pushing ahead with efforts to bring another treatment option to market.

There is a “profound medical need for an orally active treatment,” Roger Perlmutter, the pharmaceutical giant’s top scientist, said on Merck’s earnings conference call. The therapy, known as MK-4482, was discovered by scientists at Emory University and is being studied in phase 2 trials. If approved by regulators, it would compete with Gilead Sciences Inc’s remdesivir, which is administered intravenously and being evaluated as an inhaled spray.

Arizona health officials reported 3,212 new Covid-19 cases, a 1.9% rise to 174,010 and an acceleration from the 1.6% rate over the prior seven days. It was the first time in almost a week that Arizona reported diagnoses exceeding 3,000. The Department of Health Services also posted a near-doubling of testing statewide and in Maricopa County, which coincided with the spike in cases. Health Services counted 68 new deaths, bringing the statewide toll to 3,694.

Arizona recorded a 15.7% positivity rate statewide, below the 21.3% logged on Thursday. Maricopa, home to Phoenix, also had a decrease in the positivity rate, with 15.2% positive tests Friday versus 22.7% reported Thursday.

New York City must keep its Covid infection rate below 3% in order for schools to reopen, Mayor Bill de Blasio said Friday. The city’s rate has been 1% to 2%.

The increase is driven in part by a spike in the Madrid region, with 372 new infections compared to 225 the previous day. Madrid is the second region with most infections behind Aragon, which recorded 511. The number of deaths over the past seven days remaind relatively stable, with 12.

Florida reported a record 257 new Covid-19 deaths among residents Friday, bringing the cumulative total to 6,843. It was the fourth straight record.

The state has a cumulative 470,386 Covid-19 cases, up 2% from a day earlier, compared with an average increase of 2.4% in the previous seven days, according to the health department report, which includes data through Thursday. The new rate of people testing positive for the first time fell to 10.6% for Thursday, from 12% on Wednesday.

Friday’s home opener game for the Milwaukee Brewers against the St. Louis Cardinals is postponed, WTMJ-AM reported, citing unidentified sources. The postponement comes as two members of the Cardinals organization had positive Covid-19 tests, the Wisconsin radio station said. ESPN confirmed the story. Major League Baseball has been forced to shuffle its schedule after an earlier outbreak among the Florida Marlins.

The Trump administration will provide as much as $2.1 billion to Covid-19 vaccine partners Sanofi and GlaxoSmithKline Plc, the biggest U.S. investment yet in fast-tracking shots and snapping up supplies.

Part of Operation Warp Speed, the funding will support clinical trials and manufacturing while allowing the U.S. to secure 100 million doses of the shot if it’s successful, the companies said Friday. The country has an option to receive an additional 500 million doses longer term.