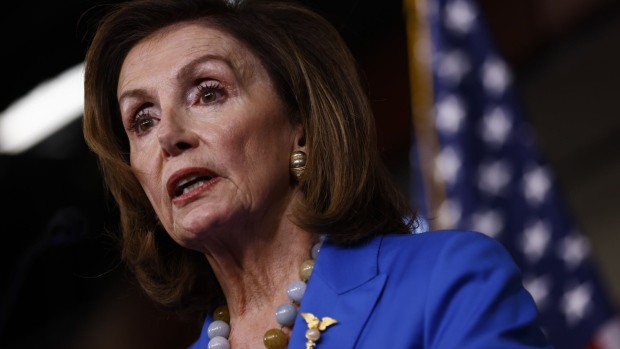 U.S. House Speaker Nancy Pelosi, a Democrat from California, speaks during a news conference at the U.S. Capitol in Washington, D.C., U.S., on Thursday, Sept. 30, 2021. Pelosi called a last minute meeting of her leadership team as she faces a crucial decision about going through with a vote today on a bipartisan infrastructure bill in the face of opposition from progressives. , Bloomberg

(Bloomberg) -- A group of House Democrats from New Jersey and Virginia met privately Tuesday with Speaker Nancy Pelosi, urging her to schedule a vote on the bipartisan infrastructure bill before their states’ gubernatorial elections next Tuesday.

The lawmakers told Pelosi that passage this week would give Democrats a tangible legislative win, at a crucial time, as polls show Republicans in both races drawing closer to Democrats in the stretch run, said two officials familiar with the meeting said.

Among those who met with Pelosi were New Jersey Representatives Josh Gottheimer, Mikie Sherrill, Tom Malinowski and Donald Norcross, as well as Gerry Connolly, Abigail Spanberger, and Jennifer Wexton of Virginia, according to another person, who like the others asked for anonymity because the meeting wasn’t public.

Virginia’s former Democratic Governor Terry McAuliffe is deadlocked in polls with Republican nominee Glenn Youngkin in a state where Democrats have gained significant strength over the past several elections. President Joe Biden, who won Virginia by 10 points in the 2020 election, campaigned with McAuliffe on Tuesday night.

In New Jersey, Democratic Governor Phil Murphy is leading GOP opponent Jack Ciattarelli, but some recent polls have indicated the race is tightening.

Both parties view the races as high stakes and potential signals of the mood of voters heading into the 2022 congressional election.

Pelosi, according to one official, told the lawmakers that the next 48 hours will be crucial in determining whether the House will vote on the infrastructure legislation, which has $550 billion in new public works spending and has already passed the Senate.

The infrastructure plan is tied to the other part of President Joe Biden’s economic agenda -- a roughly $2 trillion package of taxes and spending on social programs and climate change initiatives. Progressives want that plan finished and ready for a vote before they will support the infrastructure bill.

While Pelosi expressed optimism that both measures will pass, she told the lawmakers that they need to help sell any reluctant colleagues on both the tax and spending plan and the infrastructure bill, according to one official.