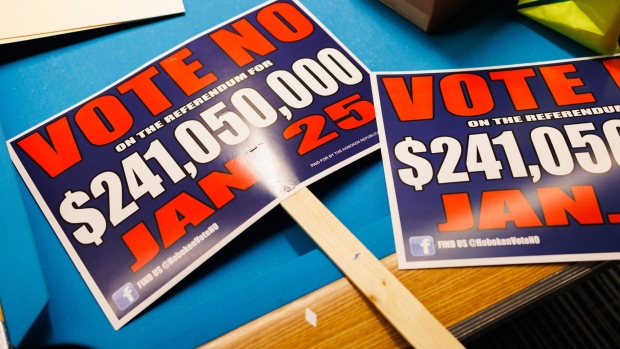 Signs read "Vote No" on the Hoboken High School referendum in Hoboken, New Jersey, U.S., on Saturday, Jan. 22, 2022. Voters in Hoboken, one of the fastest-growing cities in New Jersey, are being asked Tuesday to approve a bond referendum for a new high school -complete with a rooftop football field and an indoor ice rink - at a cost of more than $200,000 per student. Photographer: Paul Frangipane/Bloomberg , Bloomberg

(Bloomberg) -- New Jersey voters on Tuesday will decide the fate of $395 million of bond sales for school projects across the state.

Ten boards of education have placed construction questions on the ballot for projects ranging from roof replacement in Cape May to a new playground in Clinton-Glen Gardner. The largest project up for a vote is a proposed new high school in Hoboken that would cost $241 million.

New Jersey allows school districts to hold construction-bond referendums on four dates in January, March, September or December, and during annual school elections. Voter turnout is typically less than 20%. In April 2021, for example, the Clifton school district in Passaic County won approval of a $168 million project. Turnout was 7.9%.

State funds would cover a portion of most projects in the form of annual debt service aid. Among all proposals, state funding amounts to $58 million, according to the New Jersey School Boards Association.

Hoboken’s proposal is not slated to receive any state aid. Plans call for a four-story, 375,000-square-foot building with an indoor pool, aquaponics lab, 800-seat auditorium, 295-seat theater, dozens of classrooms and a range of athletic amenities.