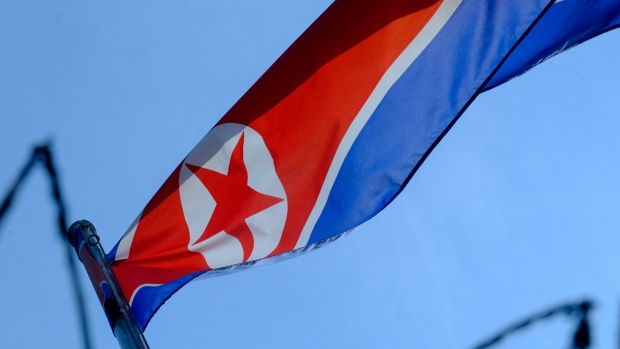 A North Korean flag flies at the Embassy of North Korea compound in Kuala Lumpur, Malaysia, on Saturday, March 20, 2021. Kim Jong Uns regime cut off diplomatic relations with Malaysia, accusing it of a super-large hostile act after its top court ruled a North Korean man can be extradited to the U.S. face money-laundering charges. Photographer: Bloomberg/Bloomberg , Photographer: Samsul Said/Bloomberg

(Bloomberg) -- North Korea fired two suspected ballistic missiles Saturday, adding to one of its biggest weekly barrages at a time global attention has been diverted to Russia’s war in Ukraine.

Two short-range suspected ballistic missiles were fired from an area near Pyongyang’s main international airport into waters off its east coast, South Korea’s Joint Chiefs of Staff said. The missiles traveled a distance of about 350 kilometers (220 miles) and reached an altitude of about 30 kilometers, it said.

The launch brought the total number of missiles fired this week to seven, shot off in four separate volleys that started on Sept. 25. North Korea typically doesn’t comment on its missile tests until a day after the fact -- if at all.

“North Korea is holding on to its obsession with nuclear arms and missiles despite persistent international condemnation,” South Korean President Yoon Suk Yeol said Saturday in a speech marking the Armed Forces Day. North Korea would face a “resolute and overwhelming response” if it ever attempted to use nuclear arms, he said.

North Korea has a habit of timing weapons tests to political events and the latest launches coincided with a visit to Japan and South Korea by US Vice President Kamala Harris, as well as the arrival of the USS Ronald Reagan aircraft carrier group to South Korea for joint drills. North Korea has bristled for decades at US-South Korean military exercises, calling them a prelude to an invasion.

During a visit which took her to the Demilitarized Zone dividing the two Koreas, Harris warned North Korea against raising tensions and called on Kim Jong Un to return to stalled nuclear disarmament talks. The US, South Korea and Japan have all said that Pyongyang is preparing to conduct its first nuclear test in five years, promising a stern and united response if Pyongyang goes ahead with the blast.

But the US push to isolate Russia over Vladimir Putin’s war in Ukraine, coupled with increasing animosity toward China, has allowed Kim to strengthen his nuclear deterrent without fear of facing more sanctions at the UN Security Council. There’s almost no chance Russia or China, which have veto power at the council, would support any measures against North Korea as they did in 2017 following a series of weapons tests that prompted former President Donald Trump to warn of “fire and fury.”

The two countries in late May vetoed A Security Council resolution drafted by the US to ratchet up sanctions on North Korea for its ballistic missile tests this year.

Putin on Friday vowed his annexation of four occupied regions in Ukraine is irreversible, as the Russian president formalized Europe’s biggest land grab since World War II and accused the West of trying to subjugate his country.

So far in 2022, the North Korean leader has fired off more ballistic missiles than in any other year of his decade in power. These include missiles that could hit the US and rockets designed to evade US-operated interceptors, increasing the threat of a credible nuclear strike against America and its allies in Asia.

Pyongyang is also seeking to miniaturize warheads for potential tactical strikes and build more powerful weapons for its missiles that could carry a warhead to the US mainland.

Kim has ignored Biden administration calls to return to denuclearization talks that broke down after Trump walked out of a summit with the North Korean leader in 2019. Even though the summits were unprecedented, they didn’t lead to any measures to wind down North Korea’s nuclear arsenal, which has only grown in size and strength.