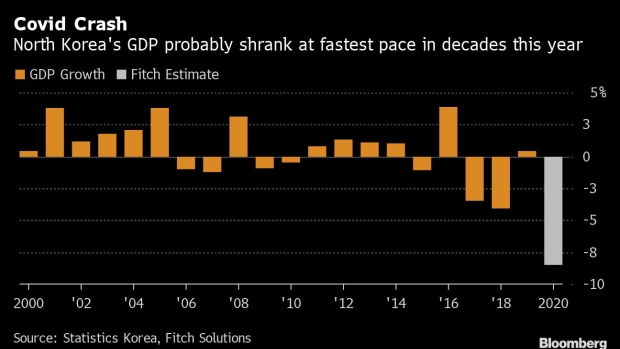 (Bloomberg) -- North Korea has stepped up its use of forced labor from prison camps to mine coal for export so it can procure cash for its nuclear weapons program in defiance of United Nations sanctions, according to a human rights group.

Satellite imagery shows an expansion of some prison camps near mines that has coincided with global sanctions being ratcheted up on Kim Jong Un’s regime to punish it for its nuclear weapons programs, according to a report released Friday by the Citizens Alliance for North Korea Human Rights, a Seoul-based group that has participating in United Nations reviews of North Korea’s rights record.

President Joe Biden’s administration is forming its policies toward Pyongyang after predecessor Donald Trump’s three summits with Kim produced no tangible denuclearization and largely avoided touching on North Korea’s human rights record, long considered by the State Department as among the worst in the world.

North Korea’s various ministries and entities tap into the pool of prison labor and other people shunned by authorities, using them as a production resource as they try meet goods export quotas to earn foreign currency, the rights group said.

“This pyramid economic system of North Korea is also directly linked to the production and proliferation of weapons, including weapons of mass destruction,” according to the report titled “Blood Coal Export From North Korea.”

The report found that despite the fact that there should be more coal available for domestic consumption due to sanctions, there are still shortages. Its findings also relied on testimony from former political prisoners, officials, employers of military-mining complexes as well as public information.

Estimates of the total number of prisoners and detainees in the prison and detention system ranged between 80,000 and 120,000, according to the U.S. State Department, which said “conditions were harsh and life threatening due to food shortages, gross overcrowding, physical abuse.”

A United Nations report has found that North Korea “continued to flout Security Council resolutions through illicit maritime exports of coal.” The latest Security Panel of Experts’ report said there have been multiple ship-to-ship transfers of coal on the high seas employed by Pyongyang to dodge sanctions.

North Korea put the brakes on the transfers for a few months in early 2020 after it shut borders to prevent Covid-19 from entering but outward shipments of coal have increased since March, it said.

North Korea’s already paltry economy last year was on a path for its biggest contraction in more than two decades due to sanctions, flooding that wiped out farmland and Kim’s decision to shut borders due to the coronavirus, which choked the little legal trade it had.

North Korea is not alone in being accused of using forced labor. In December, the Trump administration banned cotton imports from a military-linked Chinese firm it accuses of relying on “slave labor,” as it raised pressure on China over alleged ill-treatment of its ethnic Uighur Muslim minority.