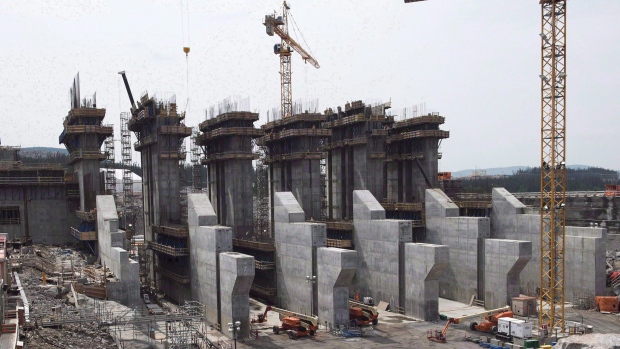 The construction site of the hydroelectric facility at Muskrat Falls, Newfoundland and Labrador is seen on July 14, 2015. , The Canadian Press

A sharply worded new report from a consulting firm hired to monitor the long-delayed Muskrat Falls hydro project in Newfoundland and Labrador says the province's wait for power could drag on for at least another year.

The province "now faces the need to select the best path forward for operating through yet another coming winter season without a reliably performing (Labrador-Island Link)," the consulting firm said in its report dated March 11.

The news is the latest in a string of setbacks for the embattled project, which is run by Crown energy corporation Newfoundland and Labrador Hydro. Liberty Consulting Group was hired in 2018 by the province's Public Utilities Board to keep an eye on Muskrat Falls as construction ended and power generation from its massive Labrador dams began.

Muskrat Falls was approved by a Progressive Conservative government in 2012 with a $7.4-billion price tag. The project was championed as a way to power the province with hydroelectric energy and replace the oil-burning generating plant that sits just outside the town of Holyrood, N.L., near the capital St. John's.

But Muskrat Falls is now years overdue and nearly double the cost, at $13.1 billion as of September 2020.

Ottawa stepped in last summer with a $5.2-billion bailout that included a loan guarantee and payouts from interest earned from the federal share in the Hibernia oilfield off the coast of Newfoundland. Without the help, residential electricity rates would have nearly doubled in order to pay for the project's ballooning costs.

Meanwhile, the project is accruing about $1 million each day in interest and financing charges, a Newfoundland and Labrador Hydro spokeswoman confirmed last October.

The last deadline missed for the start of full commercial operations was Nov. 26, 2021. General Electric, the company building the software to run the transmission line to the island, hasn't been able to work out all of the system's bugs. The company has said it believed the Labrador-Island Link could be operational by May 31, according to previous reports. But the Liberty Consulting Group report says that's unlikely.

"In short, there is no projected or projectable schedule for (the Labrador-Island Link) completion from management; we can offer none, and we place no confidence in the schedule now indicated by (General Electric)," its authors wrote. "Management should find most troubling the continued existence of critical software flaws after an already extraordinarily long software development period."

General Electric did not respond to a request for comment.

Newfoundland and Labrador Hydro said in February it was keeping the generating facility near Holyrood operational until at least 2024. The station burns about 18,000 barrels of oil per day during the peak winter season, according to the provincial government.