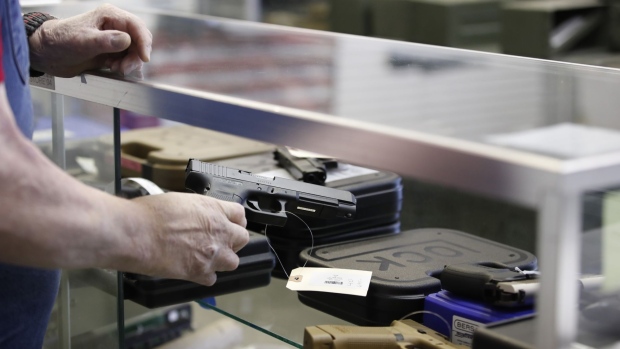 A salesperson takes a Glock handgun out of a case at a store in Orem, Utah, U.S., on Thursday, March 25, 2021. Two mass shootings in one week are giving Democrats new urgency to pass gun control legislation, but opposition from Republicans in the Senate remains the biggest obstacle to any breakthrough in the long-stalled debate. Photographer: George Frey/Bloomberg , Bloomberg

(Bloomberg) -- The US Supreme Court’s gun ruling is spurring public officials in New York and other liberal states to explore new options to restrict permits and clamp down on where people can carry concealed firearms.

Leaders from New York, New Jersey and California said they are exploring new legislation and regulations to combat the court’s action, which has the potential to offer Americans easier access to guns. The mayor of New York City, Eric Adams, said he will use “every legal resource available” to “undo and mitigate” the damage from the Thursday decision, which overturned a New York state law that limited who could carry a handgun in public.

“We’re not powerless in this situation,” New York Governor Kathy Hochul said, adding that she will push for legislation to limit the impact of what she called a “frightening” decision by the high court. “We are not going to cede our rights that easily,” she said.

“States still have the right to limit concealed carry permits to those who may safely possess firearms,” California Attorney General Rob Bonta said in an emailed statement. “The data is clear and the consequences are dire -- more guns in more places make us less safe. In California, we are committed to passing and defending commonsense, constitutional gun laws that save lives.”

Laws already exist that ban guns in buildings such as legislative assemblies, polling places and courthouses. The Supreme Court said some prohibitions on carrying arms in “sensitive places” are constitutional. Though it declined to define that term, it dismissed characterizing New York’s restriction as a “sensitive-place” law. The island of Manhattan doesn’t qualify as a sensitive place simply because it is crowded, the majority said.

“The court was very vague about what constitutes sensitive places and invited states and localities to define that themselves,” which could help limit gun carrying in urban areas like Manhattan, said Richard Aborn, president of the Citizens Crime Commission in New York City. “People have said to me, what’s the point of carrying a gun if every fifty feet on Madison Avenue is going to be a sensitive place.”

Another possibility is to restrict permit holders from storing unattended handguns in their cars, which would leave them with few options and create a de facto ban across the city, according to Leider. Despite the Supreme Court’s ruling, “in day-to-day life, it’s going to be very hard to carry a gun in New York City,” he said. “Upstate New Yorkers could also find themselves with fewer gun-carrying rights.”

However the gun permit debate plays out, it won’t happen overnight. The New York case will be remanded to a lower court and the state given time to bring its laws into compliance with the Supreme Court’s decision.

Explainer: How US States Differ on Carrying Guns in Public

“If you have a premise permit, it does not automatically convert to a carry permit,” New York Police Commissioner Keechant Sewell said. “If you carry a gun illegally in New York City, you will be arrested. Nothing changes today.”

New York is one of six states -- along with California, Hawaii, Maryland, Massachusetts and New Jersey -- where so-called “may issue” laws give local officials broad authority to deny citizens permits to carry guns in public. Today’s decision won’t affect the rights of private property owners to ban handguns from their homes or businesses. Such restrictions are common in states with both liberal and restrictive gun laws.

Instead, the Supreme Court struck down a New York requirement that applicants show a “special need” for self-protection to obtain a permit. They must also be of “good moral character” and submit a wide range of personal information, including criminal and mental-health histories and personal references. The state alerts applicants to expect the process to take at least four months to complete.

Following today’s decision, New York and other jurisdictions with “may issue” permitting regimes will be under pressure to adopt the sort of “shall issue” regimes already in use in 43 other states.

The high court ruling came in a case brought by a National Rifle Association affiliate and two individuals, who challenged New York’s more than century-old law. They argued successfully that the requirement to demonstrate “proper cause” to obtain a license to “have and carry” a concealed handgun violated the Second Amendment.

“We know of no other constitutional right that an individual may exercise only after demonstrating to government officers some special need,” Justice Clarence Thomas wrote for the court majority.

The court has taken up few firearms cases in recent decades and may remain hesitant to do so even as it’s taken a political turn to the right. Prior to today’s ruling, it had been more than 10 years since its last significant Second Amendment decision.

While the decision represents a legal landmark, even supporters on the court didn’t frame it as handcuffing state and local officials.

“Shall-issue regimes may require a license applicant to undergo fingerprinting, a background check, a mental health records check, and training in firearms handling and in laws regarding the use of force, among other possible requirements,” Justice Brett Kavanaugh wrote in concurrence with Thomas’s opinion.

“This case is not the final word,” said Adam Winkler, a professor at the UCLA School of Law. “It’s the beginning of a multi-year battle over concealed-carry regulations.”

While blue states have mostly retained or tightened firearms restrictions, the broader trend has been toward an increasingly permissive legal landscape. In 2003, Vermont was alone in allowing residents to carry handguns in public without a permit. Since then, legislatures in half the states have removed permitting requirements, mostly in recent years and involving concealed firearms.

“What the Supreme Court says about the Second Amendment is really important, but in many cases what’s most significant is happening on the state level,” says Joseph Blocher, co-director of Duke University’s Center for Firearms Law.

Another important state-level trend involves preemption statutes, which prevent local governments from restricting gun ownership and possession more than the state does. More than 40 states currently have preemption statutes on the books, versus just two in the 1970s, Blocher added.