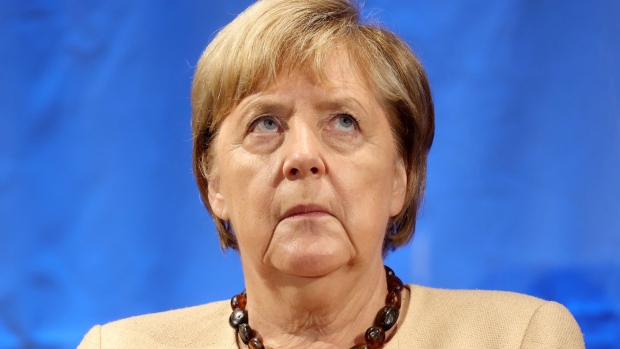 A medical worker administers a nasal swab Covid-19 test to a traveler at the Dignity Health-GoHealth Urgent Care testing site in the international terminal at San Francisco International Airport (SFO) in San Francisco, California, U.S., on Thursday, Dec. 2, 2021. The first confirmed U.S. case of the omicron variant of the coronavirus was detected in California, the Centers for Disease Control and Prevention said, as the recently detected mutation continues its spread around the world. Photographer: David Paul Morris/Bloomberg , Bloomberg

Colorado also identified a case caused by the new variant, in a woman who had visited South Africa. Worldwide, omicron continued its spread, including in India, Singapore, South Korea, Greece, Finland and Ghana.

President Joe Biden called on health providers to expand the availability of vaccines and booster shots, aiming to combat a winter surge of infections -- and hold off the omicron variant.

Two cases were identified from people based in Queens, one was in Brooklyn, and another was in Suffolk County. The last case is suspected as a traveler who is in New York City.

The Suffolk County resident is a 67-year-old female who traveled from South Africa. She tested negative upon returning on Nov. 25 and then tested positive on Nov. 30. She had mild symptoms of a headache and cough, and she has has some vaccination history. The vaccination statuses of the others are unknown.

Los Angeles International Airport will start offering free rapid Covid-19 tests for passengers arriving from overseas destinations, increasing its vigilance in the wake of the omicron cases in the U.S.

The tests are recommended for all international arrivals but will done on a voluntary basis, said Barbara Ferrer, the country’s public health director.

“We have the capacity to test a lot of people,” she told reporters. “They are going to make a big difference.”

With the return of 1.7 million students and staff after the holidays, the county is expected to keep its indoor masking mandate at schools.

New Zealand’s largest city has exited lockdown after 107 days, bringing relief to its residents but also signaling the likely spread of Covid-19 to the rest of the country.

Auckland cafes, bars and restaurants opened their doors Friday for the first time since Aug. 17 -- albeit only to vaccinated guests -- as the government’s new Covid Protection Framework takes effect nationwide.

Scientists working with the provincial government of Gauteng, the South African province that’s the epicenter of the outbreak of the omicron coronavirus variant, aim to complete a study into its virulence by Tuesday.

“Is this variant less virulent? We don’t have the answers to that yet,” said Bruce Mellado, the chairman of the Gauteng Premier’s Advisory Committee, in an interview Thursday. “Our advisory committee is doing it as we speak. We will most likely have a presentation to the command council, behind closed doors, on Tuesday.”

Illinois’s one-day Covid-19 case count nearly doubled, according to data reported Thursday on the state department of public health website. The state reported 11,524 probable and confirmed cases on Thursday, up from 6,119 the day before and the highest number since December 2020. The jump in cases is accompanied by “a record high number of tests across the entire pandemic” and a higher test positivity rate, according to an emailed statement from the Illinois Department of Public Health.

“Thanksgiving was one week ago and we are starting to see cases associated with family gatherings and travel,” according to the statement.

Total Covid-19 hospital patients have climbed by more than 1,000 in the past month, reaching 3,093 on Wednesday. As of Thursday, 56 hospitals in the state had a bed capacity of 10% or less, including Albany Medical Center Hospital, Mercy Hospital of Buffalo, Long Island Jewish Medical Center and Mount Sinai Hospital in New York City, according to the state health department.

Colorado has confirmed its first case of the omicron variant, in an adult female resident who had recently traveled to South Africa, according to a statement from state officials. The woman is experiencing minor symptoms and is isolated and recuperating at home. She had been fully vaccinated and was eligible for the booster vaccine but had not received it yet, according to the state.

President Joe Biden called on health providers to expand the availability of vaccines and booster shots, aiming to combat a winter surge of infections -- and hold off the new omicron variant.

Biden outlined a new strategy to curb the pandemic in a speech at the National Institutes of Health on Thursday, with cases rising in several states. He said his administration would also make free home Covid tests more available by requiring insurers to pay for them and “accelerate efforts to vaccinate the rest of the world.”

“My plan I’m announcing today pulls no punches in the fight against Covid-19,” he said.

Omicron is stealing most of the attention, but it’s the delta variant that’s pressuring the U.S. health-care system.

The seven-day average of hospital admissions with confirmed Covid-19 has climbed 18% in the past two weeks to 6,691, the highest since Oct. 13, according to U.S. Department of Health and Human Services data. The numbers are ticking higher in 39 states and the nation’s capital.

The risk of reinfection from the omicron coronavirus variant is three times higher than for any previous variant, according to a South African study of infections since the start of the pandemic.

The finding provides evidence of omicron’s “ability to evade immunity from prior infection,” according to the authors, Juliet Pulliam of the South African Center for Epidemiological Modelling and Analysis and Harry Moultrie of the National Center for Communicable Diseases.

A Minnesota man who recently visited New York City for a crowded anime convention has tested positive for the omicron variant.

“We should assume there is community spread of the variant in our city,” Mayor Bill de Blasio said Thursday in a statement.

The adult individual was vaccinated and had received a booster in early November, Minnesota Health Commissioner Jan Malcolm told reporters. The man reported attending the Anime NYC 2021 convention at the Javits Center from Nov. 19-21. He developed mild symptoms on Nov. 22 and was tested on Nov. 24. His symptoms have since resolved.

Zimbabwe has identified its first case of the omicron variant, a day after announcing a 10-day mandatory quarantine of all travelers entering the country.

President Emmerson Mnangagwa on Wednesday announced rules imposing quarantine on all travelers entering the country, including returning residents. Hundreds of thousands of Zimbabweans who work and live in neighboring South Africa, which was first to disclose detection of the new variant, are expected to travel home over Christmas.

The U.K. reported the most new coronavirus cases since before its so-called “Freedom Day” on Thursday, amid fears that the omicron variant could disrupt the holiday season for another year.

A further 53,495 cases were reported, the highest since July 17, although there have been a handful of days close to that number before today. That’s compared to a 7-day rolling average of about 44,600 new cases a day.

Thanks to a comprehensive vaccine uptake, the number of deaths and people in hospital in the U.K. has remained consistently low compared to previous outbreaks.

Oslo is heading back to working from home and using face masks after an outbreak at a Christmas party raised the prospect of a jump in omicron variant infections.

Home office will now be required for part of the week in Norway’s capital and 21 other municipalities, while face masks must be worn in shops, public transport, bars and restaurants, Health and Care Services Minister Ingvild Kjerkol told reporters on Thursday. Bars will have to serve customers at tables, guests will need to register to receive notices of infection exposure and limits will be placed on events held inside.

Germany imposed nationwide restrictions on people who aren’t vaccinated against Covid-19 and limited attendance at soccer games and other public events to check a brutal surge in infections.

In one of her final acts as chancellor, Angela Merkel held talks with her incoming successor, Olaf Scholz, and Germany’s 16 regional premiers on Thursday, where they agreed on new curbs including allowing only people who are vaccinated or recovered into restaurants, theaters and non-essential stores.

The officials also backed a plan to make Covid shots mandatory, saying that the lower house of parliament would vote on it soon. Scholz said he expects the measure to pass.

Finland confirmed its first case of the omicron variant on a person who had returned from Sweden.

Other people traveling with the person had also tested positive for the coronavirus, but the variant was not yet confirmed from their samples.

Greece has found its first case of the omicron variant of the coronavirus, Health Minister Thanos Plevris told reporters Thursday. The case was detected on the island of Crete in a Greek citizen who had arrived from southern Africa on Nov. 26., he said.

Singapore has detected two imported cases who tested preliminary positive for the omicron variant, after both individuals arrived on a flight from Johannesburg.

They were isolated upon arrival in the island state on Dec. 1 and had not interacted in the community. Both individuals, who tested negative during their pre-departure tests, are fully vaccinated and have mild symptoms.

India confirmed two cases of the omicron variant in the southern state of Karnataka, home to the nation’s Silicon Valley.

The two infected individuals have mild symptoms and are males aged 66 and 46, Lav Agarwal, a senior health ministry official, told reporters at a Thursday briefing in New Delhi, without elaborating.

Pfizer expects data on how well its shot protects against omicron to be available within two to three weeks.

“We don’t expect that there will be a significant drop in effectiveness,” Ralf Rene Reinert, vice president of vaccines for international developed markets, said in an interview with Bloomberg Television. “But again, this is speculation. We will check this. We will have the data in the next couple of weeks.”

GlaxoSmithKline Plc said its Covid-19 antibody treatment appears to be effective against the omicron variant in early testing.

Lab tests of the mutations found in the variant showed the drug is still active against the virus, Glaxo said. The drugmaker is now conducting in vitro testing to confirm the response against a combination of all the omicron mutations.