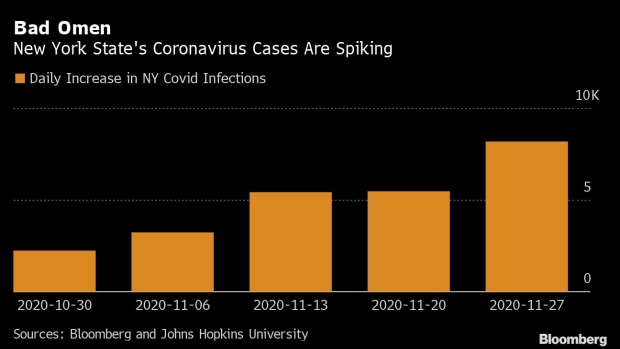 New York City reported the most daily cases since May, passing 1,500 for the second consecutive day, based on a seven-day average. The state reported a significant drop from the spike of more than 8,100 cases the day before, though hospitalizations and positive tests rose to their highest since May. California’s infections fell for the third day.

With countries across Europe signaling an extension to restrictions, German Chancellor Angela Merkel implored citizens to wear masks and stick to distancing measures. The U.K., France and Italy continued showing signs their outbreaks are slowing.

The U.K. is poised to become the first country to approve Pfizer Inc. and BioNTech SE’s Covid-19 vaccine, ahead of a long line of countries waiting for protection from the coronavirus.

A new French survey found that 59% of respondents said they wouldn’t get a Covid-19 vaccine once it becomes available, Le Journal Du Dimanche reported on Sunday, citing the findings of the Ifop survey carried out on Nov. 26-27.

North Carolina reported 1,840 Covid-19 patients in the hospital, a record, state data showed on Saturday. The seven-day average of cases also hit a new high after two days this week with infections of more than 4,000 -- the first time in the outbreak they crossed that level.

Brazil ended its third week of newly surging cases with another 51,922 infections reported Saturday. Another 587 people died on Saturday, also at the end of three weeks of a rising level of fatalities.

Cases and fatalities in Brazil had been steadily falling since a peak in July. Deaths are now roughly at same level as in May, and cases on par with early July. The nation has the most infections after the U.S. and India.

The U.K. is poised to become the first country to approve Pfizer Inc. and BioNTech SE’s Covid-19 vaccine, ahead of a long line of countries waiting for protection from the coronavirus.

Clearance is possible as soon as early next week, according to a person familiar with the situation, who asked not to be identified because the process is confidential.

Joe Biden’s transition team named three more experts to its Covid-19 Advisory Board, which is helping guide the president-elect to fulfill the key campaign promise of a robust, national strategy against the resurgent virus.

The new members are Jane Hopkins, a nurse specializing in mental health who worked most recently in Washington state; Jill Jim, executive director of the Navajo Nation Department of Health; and David Michaels, an epidemiologist at George Washington University who served in the Clinton and Obama administrations.

More than 150 people were arrested during anti-lockdown protests in central London, for offenses including breaching new coronavirus regulations and assaulting a police officer, the Metropolitan Police said.

Protesters, many of them maskless and some dressed as Santa’s elves, carried signs reading, “All I want for Christmas is my freedom back” and “Stop controlling us.”

In South Wales, police handed out 12 fixed penalties and 15 warnings to drivers as part of random checks to make sure people going into the capital Cardiff were allowed to do so.

Iowa reported outbreaks of three or more infections at 153 long-term care facilities, according to state data. Just over a week ago, the number was 114. Deaths in the facilities number 1,059, almost half the total 2,360 recorded in Iowa since the start of the outbreak, the data show.

South Dakota reported a record 54 deaths, putting fatalities for November over 500. Total deaths since the start of the pandemic are just under 1,000. The state, one of the hardest hit, also passed 79,000 infections, with another 819 cases reported on Saturday.

South Dakota is among the dwindling number of states not to impose a mask mandate or other public health measures against the virus.

California reported 11,996 new cases, with new infections declining for a third day after hitting a record earlier in the week. That brings the total to 1.18 million. The state also added 56 new deaths, with its fatalities at 19,089.

Still, daily hospitalizations climbed to their highest levels in almost four months. The state admitted 296 new patients, bringing the total to 7,684. The number of available ICU beds is also hovering near the lowest levels since the end of July.

Los Angeles County, the biggest in the state, imposed a new stay-home order Friday, limiting capacity in both essential and non-essential outlets and other common areas. It urged residents to mask up and remain at their residences as much as possible as it restricts both public and private gatherings with others who aren’t in the same households. The three-week order starts Monday.

New York state reported 6,063 cases Saturday, a marked drop from the spike of 8,176 the previous day, when a record 219,442 tests were conducted, Governor Andrew Cuomo said in a statement. The statewide positive-test rate rose to 3.98%, the highest since May. Total hospitalizations rose to 3,287, also the highest since May.

Cuomo has adopted what he calls a “micro-cluster” strategy that targets an increasing number of areas with higher infection for tighter restrictions. The positivity rate inside those areas is 5.65%, outside 3.45%, he said.

“We are entering a challenging period of sustained Covid-19 spread across this state,” he said. “It’s up to you, your neighborhood and your community to slow the spread.”

France’s fatalities rose by 213 to 52,127 on Saturday, the smallest daily increase in a month. That’s as the government eased some of the lockdown measures that have curbed infections and hospitalizations across the country, with non-essential stores reopening after four weeks of shutdown.

Health authorities reported confirmed cases increased by 12,580 to 2.21 million, while the seven-day average fell to 11,664 cases, the lowest since Oct. 5. The rate of positive tests continued its decline of the past three weeks, falling to 11.4% from 20.6% early November.

New York City reported 1,589 new cases, based on a seven-day average, the most since May. It was the second consecutive day over 1,500.

The seven-day average positive test rate increased to 3.64%. The figure has been above 3% since it reached that level earlier this month, prompting a shutdown of city schools. New hospital admissions increased to 136.

Greece reported 121 Covid-19 related deaths in the past 24 hours, a daily record. The number of daily cases fell to 1,747 bringing the total to 103,034. The government announced Thursday that the lockdown will be extended for a week to Dec. 7. “We know that we have one or two very difficult weeks ahead of us,” Greek Prime Minister Kyriakos Mitsotakis said during a visit to the second largest city of Thessaloniki, calling on Greeks to be even more careful when restrictions start easing.

Italy reported on Saturday 686 virus deaths on 26,323 new daily cases, in a declining trend compared with the previous day. The number of patients in intensive care units across the country continued to slightly fall for the third day, while total number of hospitalized patients fell for the fifth day.

The number of new virus cases in the U.K. declined for a third straight day. The U.K. reported 15,871 infections, below the average of 16,725 for the previous seven days. Another 479 deaths were reported Saturday, above the weekly average of 467.

The Metropolitan Police said it arrested more than 60 people protesting against coronavirus measures in central London. The national lockdown in England is set to end on Wednesday. The capital will move into Tier 2, allowing non-essential shops to reopen for the first time in a month.

India’s Prime Minister Narendra Modi said his government was working with local drug companies to speedily develop a Covid-19 vaccine, even as questions mounted over human trials conducted by AstraZeneca Plc, which is expected to produce the country’s front-runner shot.

Modi, who crisscrossed the country to meet officials at Cadila Healthcare Ltd., Bharat Biotech and the Serum Institute of India Ltd., said his government was “actively working” with scientists and officials to facilitate their vaccine efforts.

The U.K. may start coronavirus immunization from Dec. 7, using the vaccine developed by Pfizer and BioNTech, the Financial Times reports. Vaccination could start within hours of approval, making the U.K. the first western country to authorize a Covid-19 vaccine, the report says, citing unidentified people close to the process. Fourty million doses of the Pfizer product have been ordered.The same sped-up process may apply to a vaccine developed by AstraZeneca with Oxford University.

Austria reported a record 132 deaths due to the coronavirus in the last 24 hours, bringing the total to 3,018, or 339 per million population. While the country came through the first wave with relatively few fatalities, the second wave proved more deathly with 93% of all victims occurring since September. Meanwhile, the pace of new cases continued to decline for the 15th straight day, bringing the 7-day incidence down to 379 per 100,000. The government is due to decide next week how to proceed after the end of the lockdown, scheduled to last until Dec. 6.

Wuhan, where the Coronavirus pandemic first broke out, reported three imported frozen food packaging samples tested positive for Covid 19, the city’s health commission said in a statement on Saturday. Two of them samples were taken from frozen Brazilian beef stored in a refrigerated warehouse in the central Chinese city. A third sample from frozen Basa fish from Vietnam in another warehouse.

Justin Trudeau, already among the most enthusiastic champions of government spending, will deliver another dose of stimulus to shore up an economic recovery that’s starting to creak amid a second wave of Covid-19 in Canada.

Finance Minister Chrystia Freeland is expected to announce billions of additional funding in a fiscal update Monday, with dozens of new measures that could include topping up existing benefits to families and business along with teeing up money for infrastructure, daycare and climate change. Here’s more details.

Chancellor Merkel sought to rally citizens after Germany reported its worst run of coronavirus fatalities since the pandemic broke out.

“We have come a long way,” she said in her weekly podcast published on the government’s website, imploring people to wear masks and stick to social-distancing measures as cases mount. “Each and everyone one of us still has a role to play.”

Merkel’s comments come after coronavirus deaths exceeded 300 for a fifth day on Friday, the first time that’s happened since the disease reached Germany.

Belgium reported 998 coronavirus patients in ICU on Saturday. This marks the first time the figure slips below 1,000 after crossing into the four-digit area on October 30, and reaching a peak of 1,474 on November 10.

The development comes the day after Prime Minister Alexander De Croo warned the country might not ease virus restrictions before mid-January. While the situation was “better than four weeks ago,” De Croo said, “we have to persevere and not endanger what we’ve achieved.”

The Belgian 14-day incidence rate has dropped to 397 of 100,000 population, slipping below 400 for the first time since mid October.