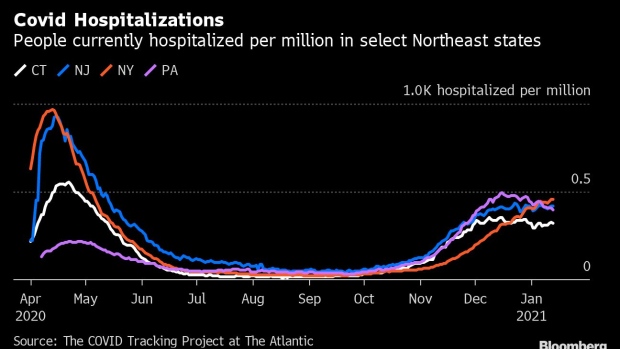 (Bloomberg) -- New York leads the U.S. Northeast in people hospitalized with Covid-19, with the numbers mounting even as much of the region has started to get a reprieve.

The Empire State recorded 8,823 people hospitalized with Covid-19, up 3.2% from a week earlier, according to the latest data from Governor Andrew Cuomo. Per million residents, New York has 454 people hospitalized with the virus, the worst rate among nine Northeast states, after pulling ahead of New Jersey and Pennsylvania, Covid Tracking Project and New York state data show.

New York’s upward trajectory is an exception. Nationwide and in a majority of other Northeast states, the number of people hospitalized with Covid-19 has begun to drop -- albeit very slightly -- compared with the previous week. On Wednesday, U.S. hospitalizations fell 1.6% from seven days earlier, the first such drop since Sept. 23. It’s possible New York’s numbers, which have been rising at a significantly slower pace lately, may soon start to reverse, too.

Even the improvements nationwide may prove tenuous, with the fallout from holiday gatherings still uncertain and a faster-spreading new variant of the virus circulating.

The U.S. posted 233,812 Covid-19 cases Wednesday, with the seven-day average dropping for a second day to 253,697, according to Johns Hopkins University data. There have been more than 385,000 deaths as of early Thursday, Johns Hopkins data show.

According to Covid Tracking Project data: