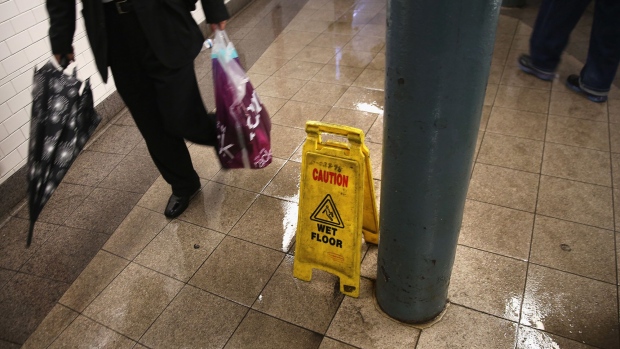 People walk through water at the entrance of the Union Square subway station in lower Manhattan on April 30, 2014 in New York City. , Photographer: John Moore/Getty Images

The MTA is working on its 20-year needs assessment, a report that will help to develop the agency’s next capital budget for 2025 through 2029, which is a blueprint for the MTA’s major infrastructure projects.

Record rainfall has flooded the New York City area and its transit systems in the past three months as Tropical Storms Elsa and Henri and the remnants of Hurricane Ida struck the region. Storm water has inundated the city’s underground stations, shutting down service and causing emergency evacuations of subway trains. The MTA estimates Hurricane Ida’s damage will cost the agency as much as $100 million.

“With extreme weather events becoming more and more frequent -- this clearly has to be a major priority for the agency,” Janno Lieber, the MTA’s acting chief executive officer, said during the agency’s monthly board meeting on Wednesday.

The MTA must deal with the effects of climate change just as it seeks to bring riders back as the city reopens from the pandemic. Ridership on its transit system in the past few days has increased, reaching their highest levels since the virus emerged in the U.S. Still, the subway carried 2.9 million people on Tuesday, just more than half of the 5.5 million average weekday riders in 2019.

The city’s subways are susceptible to flooding because the sewer system pushes excess storm water to underground transit stations. A task force of MTA and city officials have been working together since Aug. 6 on identifying subway stations and areas that are most vulnerable to flooding during major weather events.

“This group is also being tasked to look at how we can improve the situation so that the city’s street-level drainage system can capture more of the water rather than letting it flow down into our system,” Lieber said during the meeting.

The MTA needs to restore ridership to at least 2019 levels because the agency faces a potential combined operating deficit of $3.5 billion in 2024 and 2025.