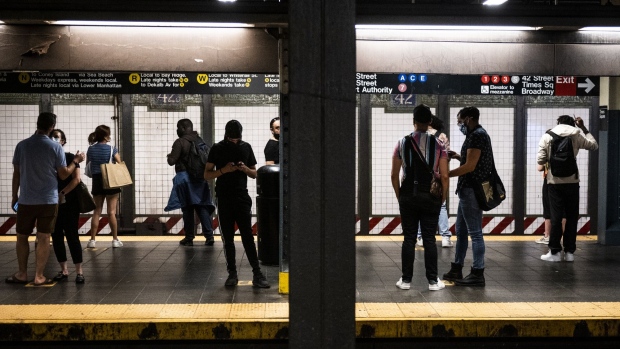 (Bloomberg) -- New York’s Metropolitan Transportation Authority is looking at ways to prevent people from falling or jumping onto subway tracks, part of the agency’s effort to improve safety amid a growing number of crimes in the system.

An MTA task force plans to update the agency’s board next month on different technology options such as sensors and platform doors, Janno Lieber, the MTA’s chief executive officer, said Wednesday during a board meeting.

The analysis comes after a homeless person this month killed a woman by pushing her onto subway tracks in front of an oncoming train at the Times Square station. In December, the MTA formed a task force that’s working with New York City officials to address an increase in unauthorized people, some of whom are mentally ill, trespassing on the rail lines.

Growing numbers of people with mental health problems or without homes have been using the transit system for shelter during the coronavirus pandemic, Lieber said. The MTA wants to manage the situation compassionately while stopping incidents that delay service, he said.

“We can’t accept when they pose a threat to our riders and to the viability of the system,” Lieber said. “We need our customers to feel safe. It’s essential for the city’s economic recovery, the return to normalcy after covid that we all crave. But it’s also the minimum, the minimum that we owe the public in the greatest city in the world.”

The MTA’s board pressed Lieber to act quickly.

“I really would like to hear some action items,” board member Frank Borelli Jr. said. “What are we actually going to do more than talk? Right now it seems like a lot of talk.”

He suggested the authority present an action plan in about 30 days with more specific steps for cutting crime and improving safety.

Transit systems have long struggled with managing similar trouble. In Tokyo a little more than a decade ago, stations added blue LED lights to the end of platforms, which were believed to soothe people who might be suicidal and discourage them from jumping in front of trains.

The situation for the MTA is particularly acute now, as it tries to bring riders back after many have cut back on bus, subway and train travel during the pandemic. Recent weekday subway ridership has been about 50% of 2019 levels.

To help encourage riders to come back, the MTA expects to postpone a fare increase planned for this year until 2023. New York City Mayor Eric Adams earlier this month said 1,000 police officers will shift to transit stations and will patrol subway cars and interact with passengers. Governor Kathy Hochul has committed to sending more mental health workers throughout the subway system to address people in need of help.

“Our workforce is scared, in addition to our passengers,” Lieber told reporters after the board meeting. “They’re feeling vulnerable because when they go to clean, they turn a corner and they’re coming upon conditions with people who are unpredictable.”

The MTA task force is looking at adding barriers to subway platforms to help prevent people falling onto the tracks or trespassing on the rails. That type of safety measure has “serious obstacles” as the MTA has various fleets of subway cars that align differently with the platforms, Lieber said.

An agency report that evaluated adding platform barriers to the system showed that only about 50 stations could be equipped right now with such safety infrastructure, Lieber said.