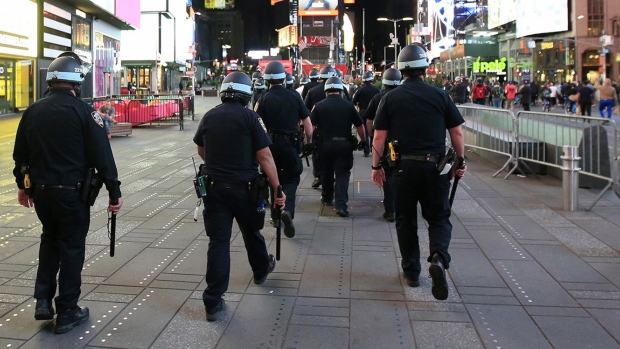 While it isn’t unusual for federal prosecutors to go after local police departments in civil rights cases, the lawsuit by New York pits two of the state’s most powerful Democrats against each other in court. De Blasio’s response to the allegations of police misconduct at the time of the protests was widely criticized as lacking. James was quick to respond to the complaints.

The suit follows a months-long probe by the state that was joined by former U.S. attorney general Loretta Lynch. James and Lynch in June held a public hearing into the conduct of police during weeks of Black Lives Matter protests, including numerous witnesses who alleged police attacked peaceful protesters without provocation.

In the suit, James seeks a finding that the NYPD’s practices were unlawful and a court order requiring a range of reforms, including a monitor to oversee the department’s policing tactics at future protests and its compliance with the law going forward. She suit seeks a ruling that would block the police from using excessive force, suppressing free speech or taking other actions that are alleged to be illegal.

The complaint also names the city, NYPD Commissioner Dermot Shea and Chief of Department Terence Monahan. They’re accused of failing to address a longstanding pattern of abuse “by not properly training, supervising, and disciplining officers to prevent misconduct, despite knowledge and public admission that it violated the rights of New Yorkers.”

The suit includes dozens of examples of alleged “blatant” use of excessive force. The state received more than 1,300 complaints and pieces of evidence through an online portal and a hot line, James said.

“Over the past few months, the NYPD has repeatedly and blatantly violated the rights of New Yorkers, inflicting significant physical and psychological harm and leading to great distrust in law enforcement,” she said in a statement. “With today’s lawsuit, this longstanding pattern of brutal and illegal force ends. No one is above the law — not even the individuals charged with enforcing it.”

The city’s police union has said its members were put in an impossible situation.

The state’s claims mirror some findings from the city’s inquiry, by its Department of Investigation, which was requested by de Blasio. The police department’s most flagrant abuses included indiscriminate baton and pepper spray use, inconsistent enforcement of curfews and excessive crowd control that heightened tensions, the city determined.

NYPD did have legal authority to make arrests for curfew violations to stop suspected looting but ended up arresting many who weren’t involved in criminal activity, the report said. Investigators found that some officers tried to hide their badge numbers and that enforcement decisions were often based on faulty intelligence and poor training. Police actions also often lacked a sense of proportion, according to the report.

De Blasio said last month that officials and police who don’t change tactics will be removed.

Lynch has blamed city leaders for sending officers out “with no plan, no strategy and no support to deal with unrest that was fundamentally different from any of the thousands of demonstrations that police officers successfully protect every single year.”