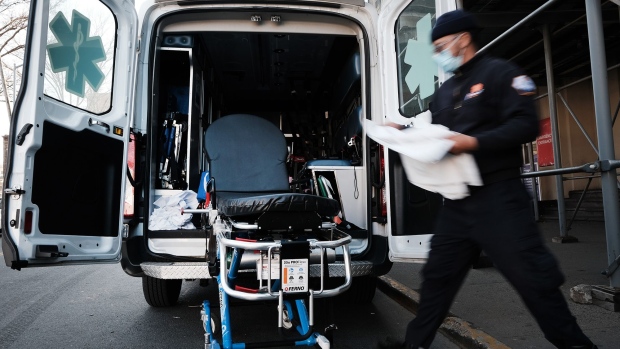 New York City’s school system, the largest in the U.S., has been temporarily blocked from imposing a mandate forcing teachers and other staff from getting vaccinated against Covid-19, according to a ruling from a federal judge. That mandate was scheduled to go into effect on Monday at midnight.

New York Governor Kathy Hochul released a plan to expand the pool of health-care workers after Monday’s deadline for them to receive a first dose of vaccine.

German cases continue to decline while Russian infections hit their highest since mid-August. Macau is stepping up travel restrictions as the city tries to prevent an outbreak that could threaten its gaming industry ahead of a week-long holiday in China.

Maine, one of the most vaccinated states, reported on Saturday a record 235 Covid-19 patients in the hospital. Since vaccinations became available in December, breakthrough cases among the fully vaccinated have made up only about 10% of total hospitalizations, state data show.

Cases have soared since the beginning of August, though they appear to have hit a plateau of roughly 3,000 a week. Almost 74% of people in Maine have received at least one dose of vaccine, compared with national average of 64.1%, according to the Bloomberg Vaccine Tracker.

New York City’s school system, the largest in the U.S., has been temporarily blocked from imposing a mandate forcing teachers and other staff from getting vaccinated against Covid-19, according to a ruling from a federal judge.

That mandate was scheduled to go into effect on Monday at midnight.

Late Friday, a judge from the U.S. Court of Appeals for the Second Circuit referred the case to a three-judge panel “on an expedited basis.” The hearing will take place on Wednesday, Reuters reported.

Bars in Rwanda reopened for the first time since the pandemic started in March 2020, if carefully with social distancing and another virus-control measures still in place, the New York Times reported.

“It’s like a new year,” said Alex Ndahiro, a radio host at bar in the capital of Kigali.

The nation had one of the strictest lockdowns in Africa, but it has hit a World Health Organization goal of vaccinating 10% of the population as positive test rates continue to fall.

Serious cases of poisoning from the anti-parasite drug ivermectin, generally used on livestock but misused as a treatment for Covid-19, have more than doubled in 2021, the Financial Times reported, quoting data from the U.S. Food and Drug Administration.

The FDA has received 49 reports of poisoning and other serious illness from the drug this year so far, and 14 of those people died, the newspaper reported. The FDA could not determine if ivermectin was the direct cause of death.

In 2020, the agency received reports of 23 cases. The drug, approved in smaller doses to treat parasites in human beings, is falsely touted on social media and some more mainstream outlets like Fox News as an alternative to Covid-19 vaccination. Prescriptions for the drug have increased 24 times compared with before the pandemic, the newspaper reported.

New York Governor Kathy Hochul released a plan to expand the pool of health-care workers after Monday’s deadline for them to receive a first dose of vaccine.

The plan anticipates declaring a state of emergency to help fill any shortfalls, easing the way for out-of-state workers, recent graduates or retirees to practice in New York state. Medically trained National Guard members could also be called into service.

“I am monitoring the staffing situation closely, and we have a plan to increase our health care workforce and help alleviate the burdens on our hospitals and other health care facilities,” the Democratic governor said in a press statement on Saturday.

She said 84% of hospital workers and 77% of nursing home staff are fully vaccinated. Those who refuse the shot or who don’t receive an exemption face termination.

Iran will receive its first batch of the Pfizer vaccine in the near future, the country’s Food and Drug Administration said in a statement, reversing a ban on the imports of the shot for being co-developed by an American company. The Pfizer jabs will be imported from Belgium and only given to pregnant women as well as to health care workers as a booster, the administration said.

The more infectious nature of the delta mutation of the coronavirus has seen it almost completely displace the beta variant in South Africa, the discovery of which led to widespread travel bans.

A study, released by two South African genomics institutes on Sept. 23, showed that the delta variant, first identified in India, drove a third wave of infections in the country. “The dominance of delta was consistently observed through increased genomic surveillance during the third wave, with the detection of beta drastically decreasing to almost none in the last weeks,” the scientists said in the report.

Indonesian Deaths Fall to Lowest Since May (6:15 a.m. New York)

Indonesia reported 123 Covid fatalities in the past 24 hours, the lowest since May 14, taking the toll to 141,381, according to the Health Ministry data. As many as 4.21 million people have tested positive for the virus.

Russia reported 22,041 new cases of Covid-19 in a day, the highest since August 14, according to the government’s virus response center. Total cases have reached 7.398 million. The country has recorded 822 deaths in a day. The number of deaths has exceeded 800 for the past five days.

Tokyo reported 382 new cases on Saturday, rising from Friday’s 235 but maintaining an overall downward trend after peaking in August. The number of serious cases fell to 131 from 139 yesterday. Japan plans to conduct trials of easing Covid restrictions, the Jiji reported Friday, citing a briefing by Economy Minister Yasutoshi Nishimura.

Malaysia added 13,899 new coronavirus cases on Saturday, bringing the total number of infections to 2,185,131, according to a tweet by the country’s health director-general Noor Hisham Abdullah. Saturday’s cases are 4.5% lower than the 14,554 infections detected on Friday.

Macau is stepping up travel restrictions as the city tries to prevent a Covid-19 outbreak that could threaten its gaming industry ahead of a week-long holiday in China.

The government will require all residents and visitors to undergo a Covid test as part of a three-day mass screening exercise, according to a statement Saturday. It also advised members of the public not to leave the city unless necessary and outbound outbound travelers to present a valid negative Covid test. Ferry services with mainland cities including Shenzhen and Zhuhai have been canceled.

The measures come after the Chinese casino hub this week reported two new cases related to a quarantine hotel, weeks after the city’s first domestic cluster in more than a year. The local gaming regulator said it will cancel a public consultation session on revising the city’s gambling law originally slated for Wednesday.

The Australian government will assist in arranging flights home for its citizens stranded overseas once 80% of eligible residents are fully vaccinated, Prime Minister Scott Morrison said.

“The caps at the airports for vaccinated Australians to return will be lifted,” the prime minister said in Washington after talks with leaders from U.S., Japan and India. Morrison said he expects Australia’s biggest airline, Qantas Airways Ltd., to ramp up its number of flights once restrictions are lifted.

“I don’t think Qantas will have to be encouraged to start running those flights and putting people on seats, and I’m looking forward to them getting on with that job, because that’s the business they are in,” the prime minister said. “Once we hit 80% vaccinations, then that means Australians will be able to travel in those states that are opening up. They’ll be able to get on planes and go overseas, and come home.”

South Korea posted a record number of new coronavirus cases, with 3,273 daily infections, after Chuseok Thanksgiving holidays. The total number of confirmed cases stood at 298,402, according to the Korea Disease Control and Prevention Agency’s website Saturday. More than 73% of the population have received at least one dose, while almost 45% of have completed their vaccinations. South Korea is currently imposing its strictest level-four social distancing measures in Seoul’s metropolitan area.