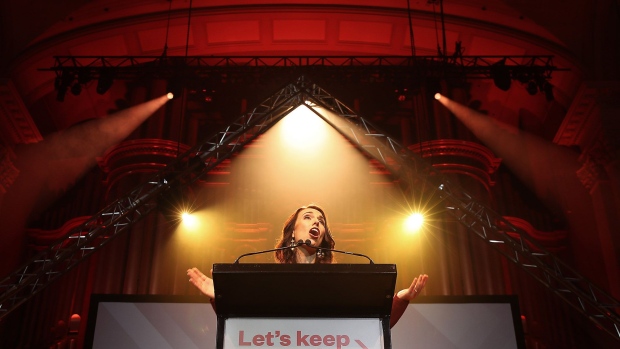 AUCKLAND, NEW ZEALAND - OCTOBER 17: Labour Party leader and New Zealand Prime Minister Jacinda Ardern claims victory during the Labor Party Election Night Function at Auckland Town Hall on October 17, 2020 in Auckland, New Zealand. Labour leader Jacinda Ardern has claimed victory in the 2020 New Zealand General Election to secure a second term as prime minister in the 53rd Parliament of New Zealand after defeating National's Judith Collins. The 2020 New Zealand General Election was originally due to be held on Saturday 19 September but was delayed due to the re-emergence of COVID-19 in the community. (Photo by Phil Walter/Getty Images) , Photographer: Phil Walter/Getty Images AsiaPac

(Bloomberg) -- New Zealand’s election has probably brought an end to the four-decade political career of Winston Peters, the maverick lawmaker who has held a string of high offices including deputy prime minister in Jacinda Ardern’s first government.

With 90% of votes counted, the New Zealand First Party that Peters leads had just 2.6% of the vote, less than the 5% it needs to be returned to parliament. Aged 75, Peters is unlikely to make another of his fabled political comebacks, while the future of his party is uncertain.

“For 27 years there has been one party that has been prepared to question the establishment and challenge authority, and tonight more than ever that force is still needed,” Peters told supporters. “As for the next challenge, we’ll all have to wait and see.”

A populist who’s been compared to Donald Trump, Peters built his support with nationalist and anti-immigration rhetoric that led to accusations of dog-whistle politics. But his policies in office were never as controversial. By championing the elderly, and delivering witty barbs with a broad grin, he endeared himself to voters across the political spectrum.

“It’s a real end of an era,” said Bryce Edwards, a political analyst at Victoria University in Wellington. “Some people will really celebrate the end of that era, but a lot will look back on a lovable rogue who has been a bigger personality than just about every other politician.”

Peters first entered parliament in 1979 as a National Party lawmaker. His turbulent career has seen him sacked from National’s cabinet and lose his constituency seat more than once. He formed New Zealand First in 1993. After the introduction of proportional representation in 1996, Peters often played king maker, extracted big concessions from major parties National and Labour in return for his backing. This saw him hold portfolios including Foreign Minister and Treasurer.

At times he has been touched by controversy, including a current Serious Fraud Office investigation into the party’s foundation and its treatment of donations.

“It’s a very exhausted party led by an exhausted, out-of-touch leader,” Edwards said. “I don’t believe there’s any chance of them getting back into parliament after they leave this year.”