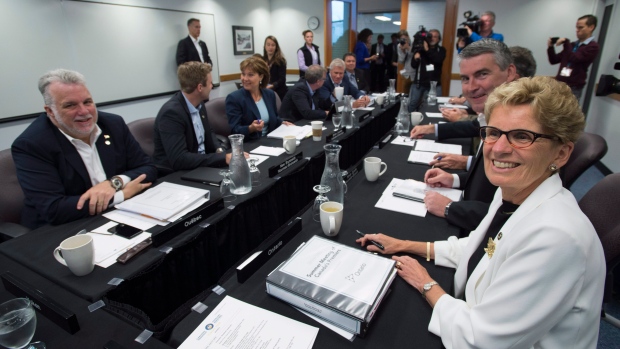 WASHINGTON -- Canada's premiers are gathered in Washington, trying their best to work around the elephant in the room.

Premiers from eight provinces and territories are in town for meetings related to the upcoming renegotiation of the North American Free Trade Agreement.

Those meetings are happening with the U.S. capital transfixed by political scandal: People are filling bars to watch former FBI director James Comey testify about his interactions with the president who fired him.

Still, there is important work to do, and people need to proceed under the assumption that NAFTA negotiations will happen -- and that they will happen under President Donald Trump, said Ontario Premier Kathleen Wynne.

The political uncertainty in the U.S. has added an element of unpredictability, but it's the job of policy-makers to prepare for an important renegotiation, Wynne said in an interview Thursday.

"That's our job -- whatever other political uncertainty is at play, it does introduce an element of unpredictability into the situation," she said.

While Comey testifies about the president attempting to pressure him over Russia-related matters, the premiers are meeting with people from Congress and the administration.

Wynne said she is hopeful about what she's heard in Washington: people she's spoken to favour a modest modernizing of NAFTA, not a full-scale overhaul.

She cautioned that it's far from a done deal, but that she hasn't heard talk on this trip about a hardball, extensive renegotiation.

"I would say that overall the quicker, less comprehensive review is what people are looking at. I don't mean by that that there wouldn't be a lot of detail because there always is in these negotiations," she said.

"But I think everyone I spoke to felt there was a way through this negotiation that would not overturn everything in the agreement... I think there's a hope that we can move through this pretty efficiently, improve what's there, add what's missing."

She referred to notion that the original NAFTA lacked details on data services, as well as certain intellectual-property rules for technologies developed since 1993.

These were things in the ill-fated Trans-Pacific Partnership, and there are signs the U.S. intends to resurrect elements of that now-dormant deal in its NAFTA overhaul.