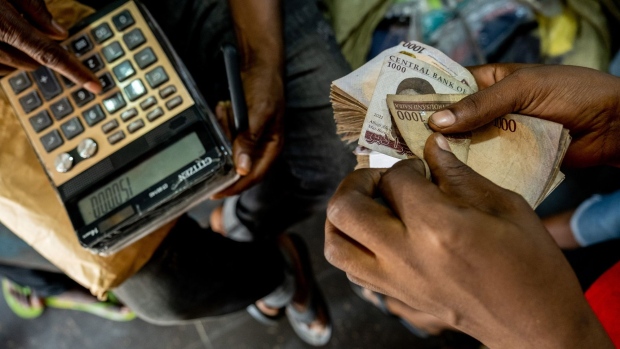 A customer counts out payment from a bundle of Naira banknotes inside a market in Lagos, Nigeria, on Friday, April 22, 2022. Choked supply chains, partly due to Russia’s invasion of Ukraine, and an almost 100% increase in gasoline prices this year, are placing upward price pressures on Africa’s largest economy. Photographer: Damilola Onafuwa/Bloomberg , Bloomberg

(Bloomberg) -- Nigeria’s naira declined further to record lows in both official and unauthorized markets ahead of the Central Bank of Nigeria rate decision today.

The local currency unit weakened 1.18% in early morning trading to 436.42 against the dollar in the spot market as of 9 a.m. in the commercial capital of Lagos. It slipped to 720 a dollar in the parallel market from 715 last week, according to Abubakar Mohammed, an operator of a bureau de change that tracks the data. This has widened the gap between official and parallel market rates to 65%, the biggest spread since 2016.

Lenders are fixing prices higher to reflect a weaker rate that the central bank is using at its auctions, according to Samir Gadio, head of Africa Strategy at Standard Chartered Bank. “The NAFEX fixing has risen in recent months in what looks like a gradual and partial convergence to higher CBN spot levels,” he said by email.

The central bank has previously resisted calls from both the International Monetary Fund and the World Bank to take steps to close the gap between the official and parallel market rates.

Nigeria maintains a multiple exchange rate regime, dominated by an official spot rate that is tightly controlled by the central bank and the unauthorized parallel market, where the currency is freely traded. In a third segment -- the Secondary Market Intervention Sales -- the central bank auctions the greenback to critical industries and sectors at as much as 465 naira.

The weakening currency would add pressure to inflation which accelerated to a 17-year high in August. The central bank raised the benchmark rate to 14% at its July meeting and another increase would take it to new a high since it was adopted in 2006.

A shortage of dollars earned from sales of crude oil, the nation’s major source of foreign exchange, is pushing authorities to ration supply in the official market, prompting residents to turn to the more expensive parallel market.

Traders who offered the US currency in the parallel market quoted it at higher rates to take advantage of increasing scarcity and rising demand, Umar Salisu, a bureau de change operator, said by phone.

Read: Naira’s Gap With Official Rate Widens to Most Since 2016

The central bank “may feel there is still some scope to raise rates in order to attract foreign exchange inflows,” said Joachim MacEbong, lead analyst at Lagos-based Acorn and Sage Consulting.