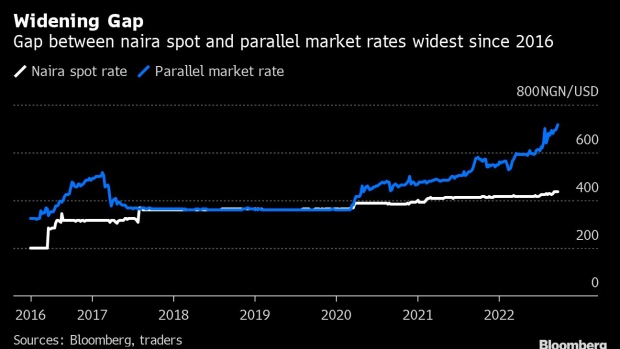 A customer hands over bundles of 1000 Naira banknotes to a trader inside a market in Lagos, Nigeria, on Friday, April 22, 2022. Choked supply chains, partly due to Russia’s invasion of Ukraine, and an almost 100% increase in gasoline prices this year, are placing upward price pressures on Africa’s largest economy. , Bloomberg

A wide gap has emerged between Nigeria’s official and parallel market exchange rates of the naira, the widest since 2016, as central bank failure to meet increasing dollar demand puts pressure on the currency.

The local currency unit weakened to 715 naira against the dollar on Friday in the unauthorized parallel market, according to Umar Salisu, a bureau de change operator that tracks the data in Lagos, the commercial capital. It’s the lowest the currency has traded in Africa’s most populous country.

This widens its spread from the official exchange rate of 435.58 naira to a dollar the spot market closed on Friday to 64%, the biggest gap in six years. Nigeria maintains a multiple exchange rate regime, dominated by an official spot rate that is tightly controlled by the central bank and the unauthorized parallel market, where the currency is freely traded.

A strict demand management policy pursued by the central bank in official market has pushed residents to make use of the black market, causing the rate to plunge at that window. The spread between the two rates reached 84% in June 2016 following dollar scarcity triggered by the plunge in crude oil, at the time.

People are holding unto their stock of the greenback because they expect it to weaken further, Salisu said by phone from Lagos where he sells the foreign currency on the streets. “A lot of people want it now to pay for school fees,” he said.

Nigeria allows citizens to purchase dollars at the official exchange rate for foreign tuition and medical expenses. However, supply has been thin in recent months as the central bank has not been able to meet the increasing demand from students planning to resume in school abroad in September. Those unable to wait have been forced to patronize the black market.

Dollar reserves were already under pressure after foreign exchange inflows declined 2.4% to $1.5 billion in the three months to June from the previous quarter, according to the statistics agency.

(Updates with naira closing rate for Friday in third paragraph)