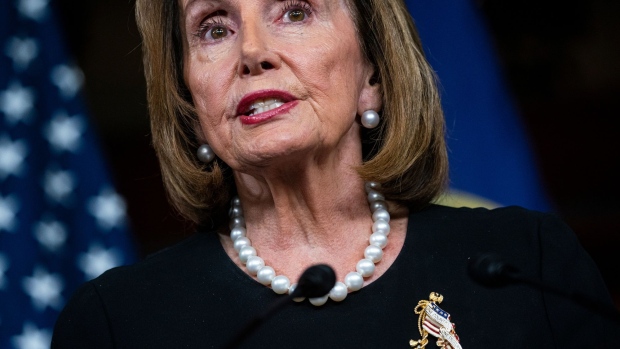 US House Speaker Nancy Pelosi, a Democrat from California, speaks during a news conference at the US Capitol in Washington, D.C., US, on Thursday, July 14, 2022. More than 200 congressional staffers sent a letter to democratic leaders in the Senate and House of Representatives this week, pressuring them to expedite a deal that would prioritize action on climate and clean energy. , Bloomberg

(Bloomberg) -- US House Speaker Nancy Pelosi plans to make a landmark visit to Taiwan next month, the Financial Times reported, despite Chinese warnings that the trip could escalate tensions between Washington and Beijing.

Pelosi will lead a delegation to Taipei in August, the Financial Times said Tuesday, citing six people familiar with the matter, in what would be the first such trip to the democratically governed island in 25 years. She had canceled a previously planned trip in April after contracting Covid-19.

The report comes amid a series of talks by top aides to US President Joe Biden and Chinese counterpart Xi Jinping in preparation for a possible conversation between the two leaders. China regularly protests foreign officials’ visit to Taipei as a violation of diplomatic agreements to avoid formal recognition of Taiwan, which Beijing claims as its own territory.

Foreign Minister Wang Yi said in April that a trip by Pelosi would represent a “malicious provocation to China’s sovereignty, gross interference in its internal affairs and an extremely dangerous political signal to the outside world.” No sitting US speaker has visited Taiwan since Newt Gingrich traveled to the island in 1997.

China has ramped up military activity around Taiwan to signal its displeasure with past high-profile visits. Hu Xijin, a commentator and former editor-in-chief of the Communist Party’s Global Times newspaper, said in a tweet Tuesday that Pelosi “will also bear historical responsibility for possibly triggering a military conflict in the Taiwan Strait.”

Nonetheless, Taipei has seen wave of such trips in recent years, as the US and others seek to push back against an isolation campaign by Beijing. Xi is seeking to pressure Taiwanese leader Tsai Ing-wen over her refusal to accept that both sides are part of “one China.”

On Tuesday, European Parliament Vice President Nicola Beer began a three-day visit to Taipei -- leading the most senior EU legislative delegation to visit Taiwan. Beer told reporters after her arrival that the “family of democracies” need to support Taiwan after China’s crackdown on Hong Kong’s opposition and Russia’s invasion of Ukraine.

“We won’t have a blind eye on China’s threat to Taiwan,” Beer said. “Europe was late for Hong Kong. We won’t be late for Taiwan. There is no room for Chinese aggression in democratic Taiwan. For the moment, we witness war in Europe. We do not want to witness war in Asia. And so now it’s the moment to stand firm on the side of Taiwan.”

China’s refusal to condemn Russia’s invasion of Ukraine has complicated its efforts to shore up relations with the Europe Union. Top European leaders haven’t responded to an invitation from Xi to meet him later this year in Beijing, the South China Morning Post reported, citing a person familiar with the matter.

Former US Defense Secretary Mark Esper was also in Taiwan this week as part of a trip backed by the Atlantic Council. In Taipei, Esper said it was time to move away from the US’s policy of “strategic ambiguity,” in which generations of Washington policymakers has avoided a clear commitment to defend Taiwan from any Chinese attack.

“The greatest challenge facing the democracies in the West today is not in Russia. It is here in Asia, where China continues to challenge the rule-based international order that threatens freedom-loving people throughout the region,” Esper said. “Taiwan is on the front lines of this epic contest.”