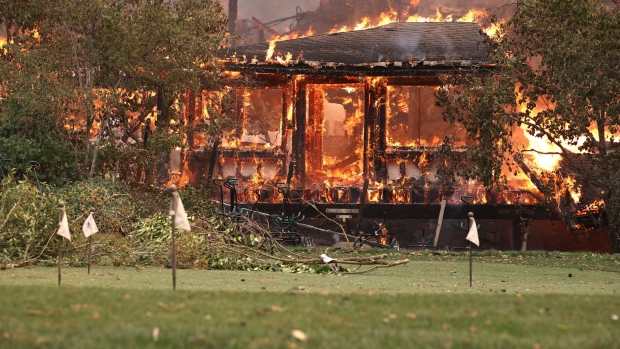 (Bloomberg) -- On the evening of Sept. 27, when winemaker Chris Howell saw flames on a ridge a mile away from Cain Vineyard and Winery, he and his wife Katie Lazar knew they had to leave.

A few hours later, Cain was engulfed by the region’s latest blaze, the Glass Fire, which has since metastasized into a group of fires known as the Glass Fire Incident. Wind-propelled flames and smoke billowed up from the canyon, between the two ridges, and moved over from the Sonoma side of the mountain. It destroyed Cain’s winery, an historic 1871 barn, barrels of the highly regarded 2019 vintage that was aging in the cellar, as well as all of his new wine harvested this year.

Howell has spent 30 years here in the Napa Valley estate, high on Spring Mountain. He built the winery’s reputation with Cain Five, an innovative cabernet blend. He says that about one-fifth of the steep, 90-acre vineyard with spectacular, to-die-for views looks all right. This week, he’ll be assessing the rest and hoping for a good 2021 growing season. “Cain is a place, not a building,” he says philosophically.

Like many other Napa winemakers this year, he won’t be releasing any 2020 wines.

“2020 is my new four-letter swear word,” emailed Tor Kenward, who owns Tor Wines. “I’ve lived through 43 harvests with earthquakes and fires, and this has been the most difficult of them all.” He won’t be making three of his usual single-vineyard cabernets. He hopes some good cabs will be made somewhere in the Valley, but says there won’t be many.

Napa has been through earthquakes and devastation before, but this fire season has been the worst ever, with more wineries lost this year than in 2017. Many of the two dozen I reached said this will probably be the year they make no cabernet whatsoever.

Spring Mountain, spared during the 2017 fires, has been hit hard. Casualties include LVMH-owned Newton Vineyards, noted for single vineyard cabernets and gorgeous gardens. It, too, will forgo a 2020 cabernet, though the bottled wine in the cellar has been saved. Two small boutique wineries, Sherwin Family and Behrens Family, are also gone.

They and Cain are among at least 18 wineries and vineyards in the northern part of the Napa Valley that have been damaged or destroyed over the past seven days—and the fire is still only 30% contained as of Monday, Oct. 5.

What began on the morning of Sept. 27 as a 20-acre brushfire in Napa’s eastern hills has now become a fast-growing conflagration covering more than 65,580 acres in Napa and Sonoma counties, as of Monday morning, according to Cal Fire. A reported 826 structures have been destroyed and an additional 163 damaged. On Sunday morning, the City of Calistoga reported that in Napa County, at least 264 commercial properties and 173 homes have been lost, with an additional 57 damaged. Cal Fire expects those numbers to rise. So far, no deaths have been reported.

The fires are from the northern part of the valley, from Calistoga to just south of St. Helena, and on the east and west hillsides. They’ve expanded from Howell Mountain, Diamond Mountain, and Spring Mountain well into Sonoma. The fire now threatens areas on both sides of the valley south of St. Helena, including Rutherford, home to Inglenook, owned by film director Francis Ford Coppola.

The list of destroyed or damaged wineries this week grew longer. In addition to those on Spring Mountain, it includes boutique winery Château Boswell and historic Burgess Cellars on Howell Mountain, purchased just weeks ago by billionaire Gaylon Lawrence, owner of Napa icon Heitz Cellar. Treasury Wine Estates, which owns Sterling Vineyards, issued a statement that buildings were damaged, though details were scant.

Flames also engulfed beloved resorts that were already having a hard year because of Covid-19. Calistoga Ranch, part of Auberge Resorts, is mostly gone. At Meadowood, where the Napa Valley auction has been held since 1981, the restaurant and its three Michelin stars are a pile of ash and rubble.

Repercussions for the 2020 Vintage

Philippe Melka, a winemaking consultant to three dozen high-profile wineries that include Newton, typically makes about 2,000 cases. This year, he won’t make any. “Smoke is moving around,” he says.

The chemical compounds in smoke can get into the skin of grapes exposed to it for a period of time, making the resulting wine smell and taste like a wet ashtray. Smoke from the Glass Fire is adding to that of fires last month.

Melka estimates that 80% of vineyards may be affected. Those in the south of Napa, from sub-regions such as Pritchard Hill, Stags Leap, and Mount Veeder may be all right. “But in a year like this,” he says, “who will pay $300 for any wines?”

About 51% of Napa’s grapes are cabernet, and the expensive wines made from them generate much more revenue than, say, sauvignon blanc. The Napa wine industry contributes roughly $34 billion in revenue to the U.S. economy, and a lot of that comes from cabernet. But Melka doubts that there will be many premium cabernets from elite Napa labels in 2020.

Wines made from white grapes picked before any fires struck will probably be fine. On Diamond Mountain, sparkling wine producer Schramsberg, whose wines have been poured at White House state dinners, were still beating back active fires, but all the chardonnay and pinot noir grapes for the house’s 2020 bubblies have been picked and processed and stashed safely in historic caves.

Many producers are pondering whether they should even bother picking cabernet. For Schramsberg, which bottles under the J. Davies label, the answer is no.

Hourglass Winery, off the Silverado Trail, has also burned. Owner Jeff Smith won’t pick the cabernet from the scorched vineyard, but he will pick those in another location. “We don’t know if the grapes are smoke tainted, because it now takes 24 to 30 days to get results,” he says. “The labs are inundated. The industry has never had anything like this amount of smoke.” Smith has no idea how much wine he’ll end up with. If he’s very lucky, he’ll manage half. None is also possible.

Spottswoode, just on the edge of St. Helena, makes particularly elegant cabernets. Owner Beth Milliken has sent samples to labs in Australia and British Columbia.“I honestly can’t predict whether we will or will not release a Spottswoode Cabernet from 2020,” she says.

It’s not just this year’s wine that’s under threat. In some vineyards, such as those at Melka Estate, the fire blackened vines and charred the soil beneath them. Those vines will probably have to be replanted.

“We’ll reprune some vines, but we won’t learn the truth of the vineyard until 2021,” says Cain’s Howell.  If the damage is only from smoke, they may recover for the next growing season.

If not, pulling out vines, obtaining plants from nurseries, and then re-planting would take two to three years, Howell says, which could cost anywhere from $50,000 to $85,000 an acre. And for top cabernet, vines must be at least five—even seven—years old before the grapes can be used.

Thousands were under mandatory evacuation, including Calistoga, much of St. Helena, and wineries on the east and west hillsides. As of Monday, residents are returning to Calistoga at their own risk. The evacuation area is being extended both south and north.

Many vintners can’t gain access to see whether their wineries have survived. They need to check on fermenting wine, turn on generators to make sure that barrel cellars of cabernet are staying cool, or pick the remaining grapes, much of it cabernet, that are still on the vines.

From their home in Connecticut, Denise and Steve Adams, owners of boutique winery Adamvs on Howell Mountain, had to organize the rescue of two dozen chickens, six sheep, and a donkey named Buttercup that are part of their biodynamic farming practices.

The winery is known for its rich cabernets, but Denise Adams isn’t planning on producing any 2020 cabernet. “We’ll have some sauvignon blanc and a bit of pinot noir,” she says. “We’re not making cabernet because of smoke taint. That happened in 2017, too.”

Many vintners are posting on Instagram to let others know whether they’re all right. Constellation Brands, a giant that owns Robert Mondavi winery and cult brand Schrader, reports that all of its properties and employees are fine with 70% of harvest completed, though the company continues to test grapes for smoke impact.

“The land and vegetation are so dry,” emailed Daphne Araujo of Accendo Cellars, “that wind is throwing flying embers as large as grapefruits high in the air in every direction.” Over the weekend, Cal Fire warned of windy, dangerous weather conditions. Now a mixed forecast includes the possibility of a tiny bit of rain—and possibly, dry lightning.

Kenward is trying to keep a positive outlook. The rays of sunlight, he says, are the 2019 cabernets aging in barrel. “We’ll get through this,” he predicts.