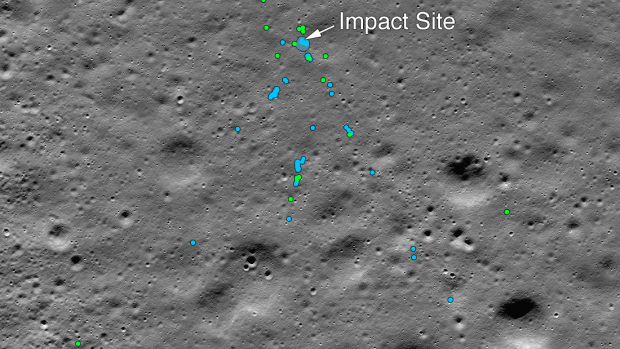 NASA has found an Indian spacecraft that crashed in September while attempting to land near the moon’s south pole during a mission that captivated millions in the South Asian nation.

The U.S. agency released images showing an impact site and debris from the Vikram lander, which disappeared with a rover minutes before a scheduled touchdown that would’ve made India just the fourth nation to pull off a soft landing on the moon. The attempt, watched by Prime Minister Narendra Modi, came 50 years after Neil Armstrong’s historic first steps on the lunar surface.

“Despite the loss, getting that close to the surface was an amazing achievement,” NASA said in a statement on its website.

The discovery came with the help of an Indian mechanical engineer called Shanmuga Subramanian, who contacted NASA after studying images of the site released by the agency’s Lunar Reconnaissance Orbiter Camera team on Sept. 26. He identified the debris and the team subsequently confirmed the finding after checking images acquired in the following months, NASA said.

The #Chandrayaan2 Vikram lander has been found by our @NASAMoon mission, the Lunar Reconnaissance Orbiter. See the first mosaic of the impact site https://t.co/GA3JspCNuh pic.twitter.com/jaW5a63sAf

The Chandrayaan-2 mission, which intended to analyze virgin territory on the moon, became a symbol of national pride. Three out of the top five trending topics on Twitter in India on Tuesday related to the discovery of the lander. At today’s prices, India’s mission cost less than 0.05% of the milestone voyage of Apollo 11 in July 1969.

India and China are both trying to establish a presence in space exploration. China was the first country to land a rover on the far side of the moon, while India focused on being first at the southern pole, the same spot NASA is targeting in 2024 with its Artemis mission. Beyond nations, billionaires Jeff Bezos, Elon Musk and Richard Branson are also competing in an unofficial space race, from launching satellites to sending astronauts and tourists into space.