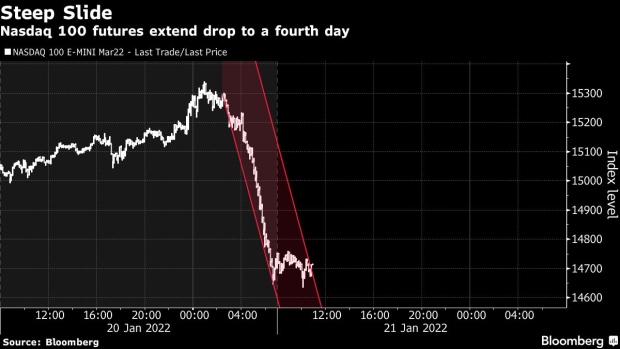 Sun shines outside of the Nasdaq MarketSite in New York, U.S., on Monday, Nov. 9, 2020. Stocks surged around the world and bonds tumbled after a large-scale coronavirus vaccine study delivered the most-promising results in the battle against the worst pandemic in a century. Photographer: Michael Nagle/Bloomberg , Bloomberg

March contracts slid as much as 1.4%, before paring their decline to 0.8% as of 11:20 a.m. in Tokyo, as investors remained nervous over the prospect of tighter Federal Reserve policy. A report Thursday showing a gain in U.S. jobless claims to a three-month high did little to quell those concerns.

“Markets eventually deemed that the underperformance in jobless claims is insufficient to drive any significant change in the pace of Fed policy tightening,” said Jun Rong Yeap, a strategist at IG Asia in Singapore.

Losses in Nasdaq 100 futures accelerated in late U.S. trading as Netflix announced that it expects to add just 2.5 million subscribers this quarter, a number that falls short of Wall Street’s estimates and would mark the slowest start to a new year for the company in at least a decade. S&P 500 futures and Dow Jones futures dropped as much as 0.8% and 0.5%, respectively.

“The lackluster outlook from Netflix this morning also adds on to the bearish sentiments, as investors pare back on risks in light of Fed policy tightening and challenges to firms’ growth outlooks ahead,” IG’s Yeap said.