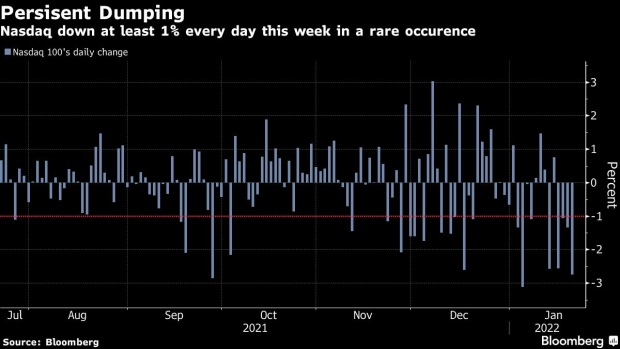 (Bloomberg) -- Bulls should be glad there were only four days this week instead of five.

To wit, the Nasdaq 100 just did something it hasn’t done since the aftermath of the internet bubble: fall more than 1% in every session of a week. It doesn’t count as a superlative because Monday was a holiday. But for investors caught up in the selloff, it felt like something shifted.

A full week of big down days hasn’t happened since the dot-com bubble burst, first in April 2000 and then in September 2001. Back then, the Nasdaq went on to fall another 28% before the market bottomed roughly a year later.

“If you just look at those two prior instances, right after 9/11 was a brutal market, while the other was the first leg down in the collapse of the tech bubble,” said George Pearkes, a strategist at Bespoke Investment Group. “It’s certainly ominous, isn’t it?”

The Nasdaq 100 tumbled 7.5% this week as what started as an aggressive selloff in speculative corners spread to the rest of the market. Disappointing results from pandemic darlings like Neflix Inc. accentuated investor angst that as the economy recovers, tech’s growth edge is disappearing. Add that to stretched valuations and there was room for a pullback.

Down almost 12% in January, the Nasdaq 100 is on course for its worst month since the 2008 global financial crisis. On any four-day basis, the current streak of 1% drops was the first since 2018.

“The last-hour selling and the consistent selling each day does seem like institutions are done being patient and rushing to get out,” said Chris Murphy, co-head of derivatives strategy at Susquehanna International Group.

Investors appear to be paying up for near-term hedges as share prices spiraled down. The CBOE NDX Volatility Index, a gauge of cost options tied to the Nasdaq, jumped 8 points over the four days to 34.06, the highest level since last March.

Whether this is the start of a bottoming process or something worse is hard to tell. In Bank of America Corp.’s latest survey of global fund managers, net allocation to the technology sector fell to the lowest level since 2008.

“If there’s this kind of liquidation underway here, you have to wonder how much further things could fall,” said Pearkes at Bespoke. “On the other hand, this sort of pervasive negativity and selling is what contrarians look for as a sign sentiment has gotten carried away to the downside.”