Tech shares tumbled anew, sending the Nasaq 100 Index down 11 per cent from its all-time high, as investors fled high-valuation stocks for companies whose fortunes are closely tied to the economic cycle.

The benchmark for megacap tech dropped 2.9 per cent and is now at the lowest since November. The S&P 500 ended lower after rising as much as 1 per cent as tech shares in the gauge dropped 2.5 per cent. Financial firms and materials producers kept losses from being worse. The Dow Jones Industrial Average hit an all-time high before settling for a 1 per cent gain, buoyed by rallies in banks and Walt Disney Co. Tesla Inc. pushed its five-day rout past 20 per cent. Blank-check companies backed by Chamath Palihapitiya tumbled.

The 10-year Treasury rate jumped toward 1.6 per cent, while the dollar strengthened. Brent crude briefly traded near US$70 a barrel before pulling back. Gold slumped and Bitcoin traded above US$51,000. 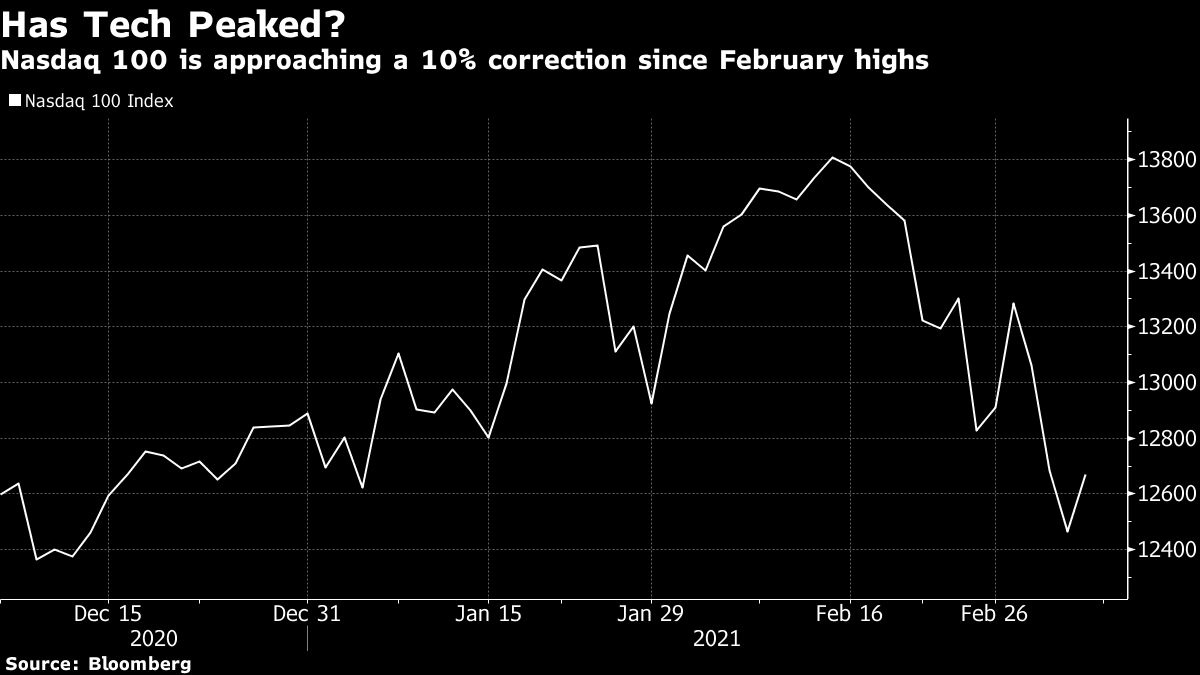 Investors embraced the prospect for a surge in global economic growth as vaccine distribution improves and the U.S. heads toward passing a US$1.9 trillion spending bill. The risks associated with rising Treasury yields remain an overhang amid fears that government aid programs could overheat economic growth.

“You will see a lot of volatility in markets,” Kim Stafford, Asia Pacific head at Pacific Investment Management Co., said on Bloomberg Television. “We believe that confidence is improving, especially with vaccines coming online, so we will see an uptick in growth globally. There are a lot of reasons to be confident in the market, but a lot of this is also priced in.”

There are also questions about whether equity valuations have become excessive, especially in speculative tech shares. The Nasdaq 100 Index has fallen about 8 per cent since early February.

Here are some key events to watch:

The annual session of China’s National People’s Congress continues in Beijing.
Japan GDP is due Tuesday.
EIA crude oil inventory report is due Wednesday
The U.S. February consumer price index will offer the latest look at price pressures Wednesday.
The European Central Bank holds its monetary policy meeting and President Christine Lagarde is set to do a briefing Thursday.

The Stoxx Europe 600 Index rose 2.1 per cent to the highest in almost three weeks.

The Japanese yen depreciated 0.5 per cent to 108.88 per dollar, the weakest in nine months.

The yield on 10-year Treasuries rose three basis points to 1.59 per cent.

Germany’s 10-year yield gained two basis points to -0.277 per cent, the highest in more than a week.

West Texas Intermediate crude declined 2.1 per cent to US$64.71 a barrel.