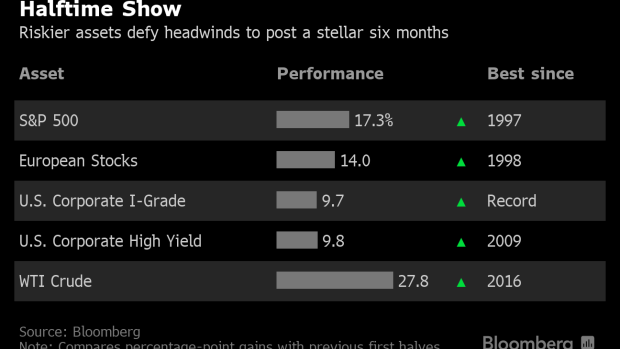 Pedestrians pass in front of the New York Stock Exchange (NYSE) in New York, U.S., on Friday, May 24, 2019. U.S. equities climbed at the end of a bruising week in which escalating trade tensions dominated markets. Photographer: Michael Nagle/Bloomberg , Bloomberg

(Bloomberg) -- The largest first-half rise in U.S. stocks since the dot-com craze was poised to get bigger as futures traders breathed relief over signs of truce in the China trade war, at least for a day. Tech stocks led the climb.

About $5 trillion has been restored to American share values in 2019, reversing a quarterly plunge from late 2018 that was among the worst of the bull market. Enough optimism has been priced back into the market that while welcoming progress, investors were skeptical the talks, announced this weekend by presidents Donald Trump and Xi Jinping, would inaugurate lasting gains.

“It’s a big risk-on event but I don’t know if it has the legs to carry the S&P much higher,” said Walter “Bucky” Hellwig, a senior vice president at BB&T Wealth Management. “We bumped against a ceiling a few times, in September, April and June. I don’t know if the China developments have the strength to carry us to and above 3,000.”

The hanging threat of a trade war and an inability to resolve mixed economic data has made handicapping U.S. stocks a particularly thankless proposition of late. Wall Street strategists, almost permanently bullish in their historical orientation, have been unwilling to commit to a direction, with the average of 25 forecasters tracked by Bloomberg calling for the S&P 500 to end the year almost exactly where it is now.

One American sector where more volatility is virtually assured is semiconductors, a group whose decline in May represented its worst monthly retreat in a decade, after Trump said he would allow U.S. companies to resume sales Huawei Technologies Co., China’s largest telecommunications-equipment maker. Some optimism had already been priced in, with the Philadelphia Semiconductor Index up 12.6% in June before word of the truce broke.

“The question is whether the rally in the semis will be able to follow-through after the initial reaction,” said Matt Maley, equity strategist at Miller Tabak & Co. “The group was already facing weakness in demand and sales before the trade talks broke down and before Trump instituted the ban against Huawei. Therefore, the group will still be facing some material headwinds.”

For investors convinced the thaw in trade will stick, gauging the extent of weakness in the U.S. and global economy becomes the central task. Data last week showed new home sales and consumer confidence falling month-to-month and trailing forecasts in the U.S., though both remain elevated by standards of the last 10 years. A report on July 5 is forecast by economists to show the economy added 160,000 jobs in June after May’s data slipped below every estimate compiled by Bloomberg.

“This maintains an open door for a probable rate cut from the Fed based on continued uncertainty,” said Jason Browne, president of Alexis Investment Partners. “I continue to hold gold and am underweight bonds.”

--With assistance from Sarah Ponczek.