U.S. stocks added to their best three-day rally since 2020, as investors bid up companies that benefit from a strong economy amid speculation the Federal Reserve won’t derail growth as it fights inflation.

The S&P 500 rallied into the close of trading, led by gains in energy producers and banks, while the tech-heavy Nasdaq 100 also advanced. Treasury yields rose and the dollar was weaker.

With the gains, the S&P 500 has now surpassed the midpoint of last month’s peak-to-trough decline, indicating to some chartists a full recovery may be underway. 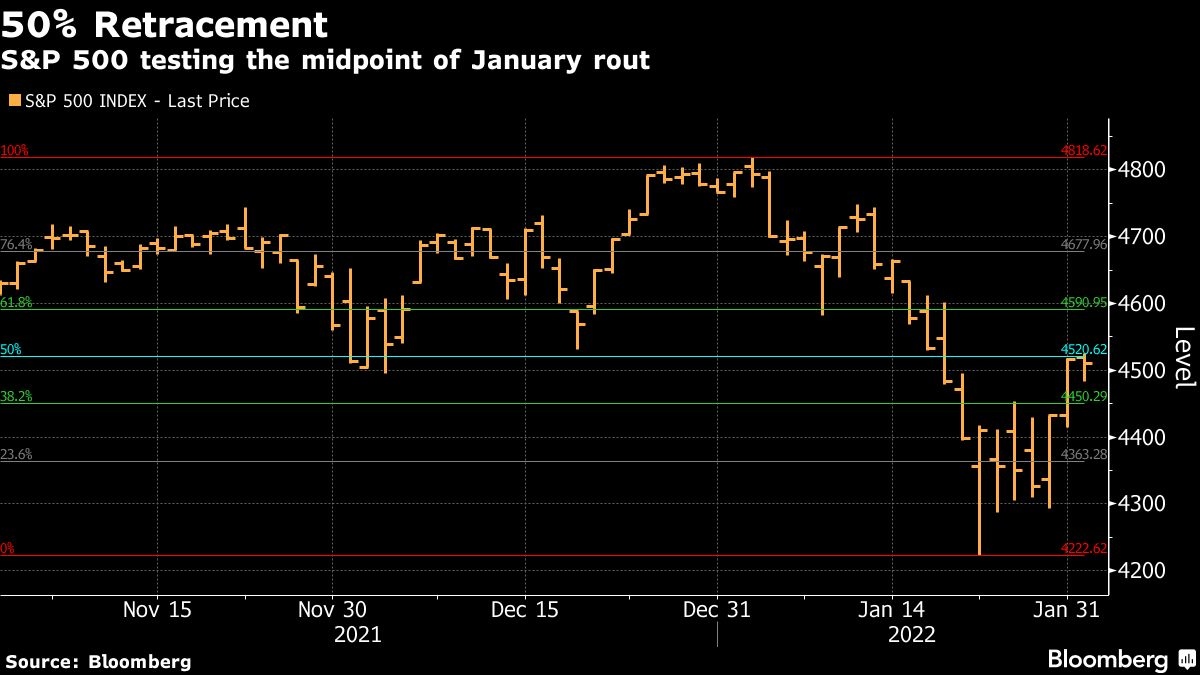 Earlier in the session, equities had struggled for direction as solid economic data rekindled nerves over the pace of the Federal Reserve’s pivot to more restrictive policy. Data on job openings and manufacturing showed a resilient economy that the Fed is trying to cool after inflation spiked to the highest in four decades. However, bank officials have indicated they are aware of the threat to stifling growth.

“It feels like we are starting February with an uneasy truce between buyers and sellers, following the brutal correction we had last month,” said Mike Bailey, director of research at FBB Capital Partners. “Looking ahead, my sense is investors see Jay Powell as having his foot a few inches away from the brakes. Will the market get a gentle tap? Or will the Fed slam on the brakes?”

Waves of volatility have swept across markets after Powell, chairman of the Fed, signaled swifter monetary-policy tightening than many expected. However, regional Fed presidents Mary Daly and Esther George have expressed caution over over faster-than-necessary tightening.

The comments still indicated “that tightening needs to be done, but there was a suggestion that it would be better to run down the balance sheet more quickly rather than hiking rates rapidly,” Fiona Cincotta, senior financial markets analyst at City Index, said by phone. “That’s pushing back on this idea of rapid increases in interest rates.”

“I don’t think it’s a coincidence that the market has started to stabilize as we start to get into earnings season,” said Giorgio Caputo, senior fund manager of the JOHCM Global Income Builder fund. “You’ve had strong reports from companies like Microsoft and Apple, which are in many ways, bellwethers for the economy of the moment and the parts of the economy that are growing.”

Dennis DeBusschere, founder of 22V Research, added: “Fed tightening is still the path forward. But a short term rebound in equities will continue -- led by growth and cyclicals -- as investors focus on a narrative of ‘peak tightening’ ahead of what is likely to be a weak payroll report.”