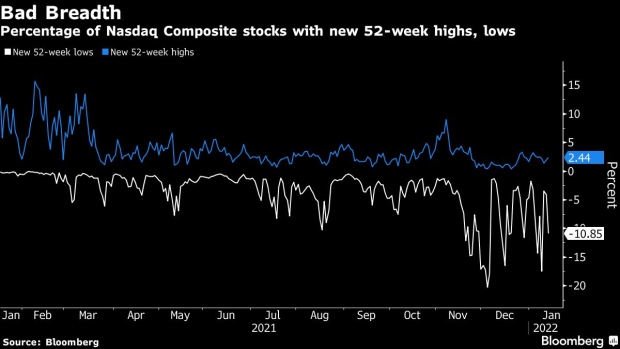 (Bloomberg) -- The tech stock-rout, as steep as it’s been, has still only pushed the Nasdaq Composite Index down about 8% from its November high, just shy of an official correction for a benchmark that’s more than doubled in less than two years.

Yet beneath the surface it looks a lot worse.

More than 36% of the stocks in the index are down at least 50% from their 52-week highs, an extraordinarily large number given the scale of the overall index’s drop, according to Ned Davis Research. Typically when the Nasdaq is within 10% of its peak, an average of just 12.5% of its stocks have declined that much, the firm said.

The break reflects how strongly the major equity benchmarks are being influenced by the technology industry’s mega-cap giants. And their stocks haven’t been hit as hard this year as some of the smaller, fast-growing tech companies that are reliant on financing and whose valuations depend heavily on future profits, making their shares particularly sensitive to higher interest rates.

As a result, it’s unclear whether the market will break with previous patterns suggesting there’s more pain ahead. Ned Davis said the number of Nasdaq stocks that have fallen so deeply from their peaks would usually point to a “cyclical bear market,” which tends to be a short-term decline of at least 20% from records that lasts a few months.

“Market breadth for Nasdaq stocks is pretty pathetic,” Ed Clissold, chief U.S. strategist at Ned Davis, said in an interview. “When you’re in the middle of something like this, it’s tricky to decipher whether it’s a normal rolling correction or a bull market peak. But the longer this goes on, the harder it’s going to be to ignore.”

To be sure, the divergences won’t necessarily lead to a bear market. Much of the recent weakness has centered on micro-cap stocks, which have typically been more volatile and less liquid than shares of larger companies, Clissold said.

Tech stocks were under pressure again on Friday, with the Nasdaq Composite 0.5% lower in late-morning trading after staging a brief rebound at the open.

“We’ll have to see if earnings season comes to the rescue once again,” Clissold said, explaining that technical indicators like market breadth have improved over the past few quarters as corporate-profit outlooks improved. “Still, earnings revisions over the past several weeks weren’t as strong as other pre-announcement periods last year, which leads us to believe that we may not get those fantastic beat rates.”