The stay-at-home trade roared back on Monday after a rough week, sending the Nasdaq 100 to its best gain in three months and pushing one measure of momentum to the highest in two decades.

The Nasdaq 100 rose almost three per cent Monday, it’s best day versus the S&P 500 since mid-April. Meanwhile, the average S&P 500 stock dropped 0.5 per cent. Gains in popular technology and Fang stocks lifted the benchmarks — the Nasdaq is now up 25 per cent in 2020 and the S&P 500 is positive for the year.

The Fang bloc of megacap technology companies gained more than three per cent Monday, on pace for its biggest gain in two weeks. Amazon.com, which has seen business surge as a result of the pandemic, was the standout. The e-commerce giant rose more than seven per cent amid growing optimism about web shopping trends. Other stocks that have benefited from more people staying at home like software makers Twilio Inc. and Atlassian Corp. rallied more than 10 per cent, while Shopify Inc. and Zoom Video Communications Inc. gained more than eight per cent.

The rally has pushed the Nasdaq 100 further away from its recent trend line. Trading 21 per cent above its average price over the past 100 days, the gap is the widest since the dot-com peak in March 2000. 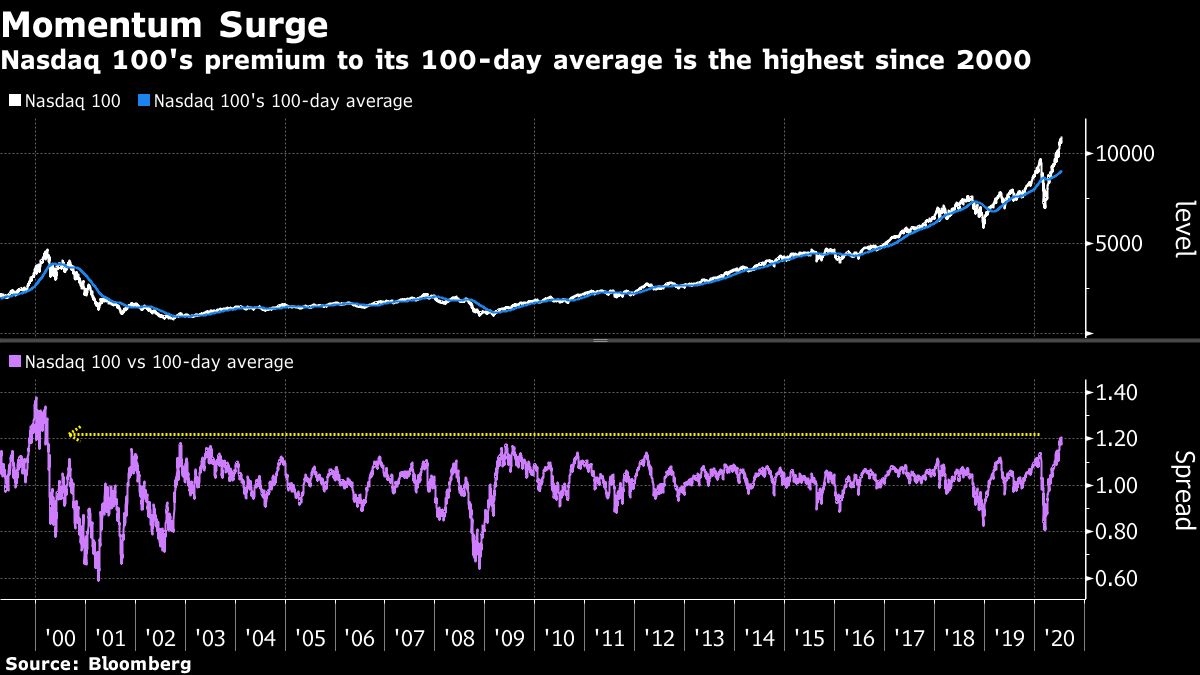 Facebook Inc., Amazon.com, Netflix Inc. and Alphabet Inc. dropped 5.5 per cent as a group last week as hopes for an economic rebound re-emerged. Software stocks were also under pressure as investors rushed to take profits on stocks that had soared since the start of the year.

The volatility that’s playing out in the shares of growth companies, including fast-growing technology companies, is a function of some value stocks beginning to look more attractive, according to Bob Doll, chief equity strategist and senior portfolio manager at Nuveen.

“When the economy is going straight down and earnings estimates are getting cut, you want to know what companies are going to grow no matter what,” he said in an interview. “Now we’re in a period where other things are getting some earnings growth too and they’re a lot cheaper.”