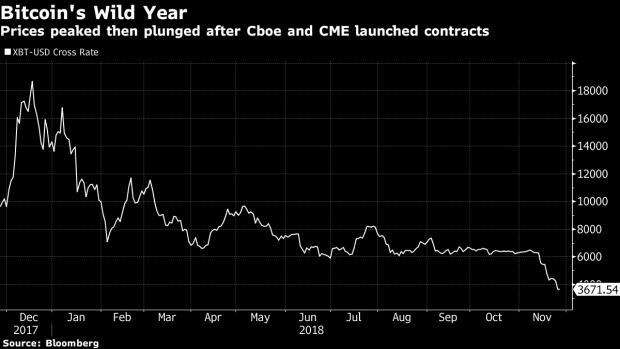 (Bloomberg) -- Nasdaq Inc. is moving ahead with a plan to list Bitcoin futures, according to two people familiar with the matter, betting on sustained interest despite the cryptocurrency’s dramatic plunge over the past year.

Nasdaq has been working to satisfy the concerns of the U.S.’s main swaps regulator, the Commodity Futures Trading Commission, before launching the contracts, the people said. The New York exchange operator, which was first reported to be eyeing Bitcoin futures last year, wants to allow trading in the first quarter of 2019, one of the people said.

Bitcoin futures briefly captivated the financial world -- and drew resistance from large derivatives brokerages -- when CME Group Inc. and Cboe Global Markets Inc. used an expedited self-certification process to bring their contracts to market last December at the height of the global crypto craze. Despite lofty hopes that Bitcoin futures would usher in a new era of institutional crypto investment, trading in them has been modest and the digital currency has plunged from around $20,000 to less than $4,000.

After CME and Cboe listed their contracts, the CFTC announced an enhanced review process for exchanges looking to list virtual currency derivatives.

Back in January, Nasdaq Chief Executive Officer Adena Friedman said the exchange was weighing how to distinguish its plans from contracts already offered by competitors. The Nasdaq futures will be based off the Bitcoin’s price on numerous spot exchanges, as compiled by VanEck Associates Corp., the person said. CME uses prices from four markets, while it’s just one at Cboe.

Separately, VanEck has been trying to win approval from the Securities and Exchange Commission for a crypto-based exchange-traded fund.

Nasdaq officials declined to comment. An outside representative for VanEck and a CFTC spokeswoman didn’t respond to requests for comment.

--With assistance from Rachel Evans.

To contact the reporter on this story: Ben Bain in Washington at bbain2@bloomberg.net

To contact the editors responsible for this story: Jesse Westbrook at jwestbrook1@bloomberg.net, Nick Baker