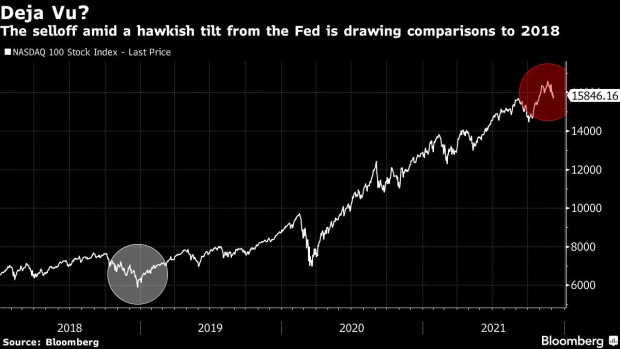 Signage is displayed outside the Nasdaq MarketSite in the Times Square neighborhood of New York, U.S., on Monday, July 20, 2020. U.S. stocks fluctuated in light trading as investors are keeping an eye on Washington, where lawmakers will begin hammering out a rescue package to replace some of the expiring benefits earlier versions contained. Photographer: Michael Nagle/Bloomberg , Bloomberg

(Bloomberg) -- The Nasdaq 100 Index’s rebound to start the week has done little to calm nerves after a selloff that has investors fretting that the market is headed for a replay of December 2018, the last time a hawkish Federal Reserve sent stocks tumbling.

Market watchers point to similarities with the selloff three years ago: The prospect of higher interest rates, sky-high valuations in technology stocks and mounting concern about an economic slowdown. The tech-heavy Nasdaq 100 lost 12% in just two weeks back then and ended the year in negative territory for the first time since 2009 as rate hikes led to a selloff in expensive stocks.

With Fed policy makers meeting next week, markets are likely to have a nail-biting climax to 2021. The Nasdaq 100 is down 4.4% since its Nov. 19 peak, almost twice the decline of the broader S&P 500.

“The current market is extremely reminiscent of the fourth quarter of 2018, when central banks moved from easing to tightening globally,” said Jim Dixon, senior equity sales trader at Mirabaud Securities.

Stock market gurus at Morgan Stanley and Bank of America Corp., who have also highlighted the similarities to 2018, point out that markets back then recovered most of their December losses a month later. The current selloff may last longer, they say.

Here’s why: Morgan Stanley says President Joe Biden appears to be more focused on fighting inflation than lifting the stock market, which was a frequent subject of commentary by his predecessor, Donald Trump.

“It’s possible we won’t see the same pressure on the Fed to back off if markets continue to wobble like they did in late 2018 for the same reason -- a Fed determined to tighten policy,” strategists led by Mike Wilson said in a research note.

The pullback in U.S. stocks has been led by some of the most expensive stocks in the technology sector. Cybersecurity company Crowdstrike Holdings Inc., the most expensive stock in the Nasdaq 100 at 223 times estimated earnings, and Zoom Video Communications Inc. at 42 times have both lost about a quarter of their value since the peak.

On the other hand, Apple Inc., a relative bargain at less than 29 times earnings, is hovering near all-time highs as the iPhone maker is deemed a safe bet in rocky times.

Analysts including Brad Reback at Stifel Financial Corp. warned of the potential for more declines in a group of bellwether software companies such as Salesforce.com Inc. and ServiceNow Inc. based on performance in past selloffs and relative valuations. “Growth stocks are more expensive now than they were in prior periods, suggesting that downside risk still exists,” he said.

For now, the Nasdaq 100 is on track for another bounce Tuesday, and strategists at Barclays Plc and UBS Global Wealth Management say a more hawkish Fed and the spread of the omicron variant of the coronavirus are unlikely to derail the rally in stock markets.

“There’s little doubt markets are in for a bumpy ride this month,” said Nicholas Colas, co-founder of DataTrek Research. “History is simply too clear about how December goes when we’ve already seen excellent returns and investors face both Fed policy and near-term earnings uncertainty.”

Metaverse -- the most buzzy word in tech -- has lost its shine in the recent selloff. The Roundhill Ball Metaverse ETF, which includes the likes of Roblox Corp., Nvidia Corp., a maker of graphics processors, and Facebook owner Meta Platforms Inc., has given back all the gains it saw after Facebook changed name to Meta.