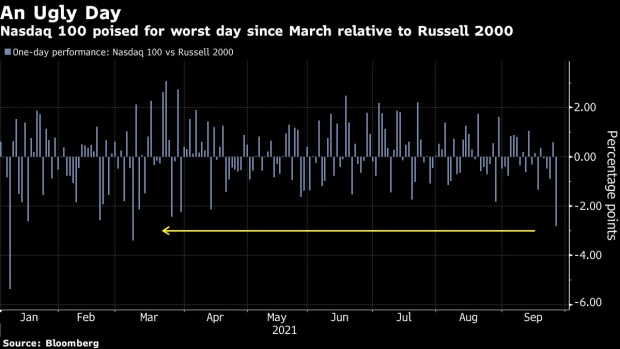 (Bloomberg) -- The latest spike in Treasury yields has become a problem for richly valued tech shares.

The Nasdaq 100 fell as much as 1.5% Monday as the yield on the U.S. 10-year note continued its rally from last week, spurring a rotation out of growth stocks and into value.

Traditionally higher yields are a sign of robust growth expectations, making the premium investors pay to hold high-growth companies less attractive. As such, technology shares with particularly stretched valuations bore the brunt of the selling as traders dumped the stocks in favor of more economically sensitive shares.

A Goldman Sachs Group Inc. basket of software stocks with an enterprise value of at least 8 times sales tumbled 2.5%, the most since June.

“If you look at some of the things that are getting hit today from a sector perspective, it’s software, it’s biotech, it’s ARK -- all the Cathie Wood stuff,” said Cliff Hodge, chief investment officer at Cornerstone Wealth. “So all these things that have really high future growth rates.”

The pain was most pronounced when ranked next to small-caps. The decline on the Nasdaq 100 trailed a gain on the Russell 2000 by almost 3 percentage points, on track for its worst day of underperformance since March.

Microsoft contributed the most to the Nasdaq 100’s fall, decreasing 1.9%, while Atlassian had the largest drop at 5.5%. Treasury yields, meanwhile, extended a streak of gains to a third day, briefly surpassing the 1.5% level for the first time in three months.

“The market is exceptionally momentum-driven this year without a lot of conviction and low liquidity,” said David Katz, portfolio manager at Matrix Asset Advisors Inc. “In the last week you had interest rates start moving higher, which generally favors financials and value stocks and is negative toward growth type companies.”