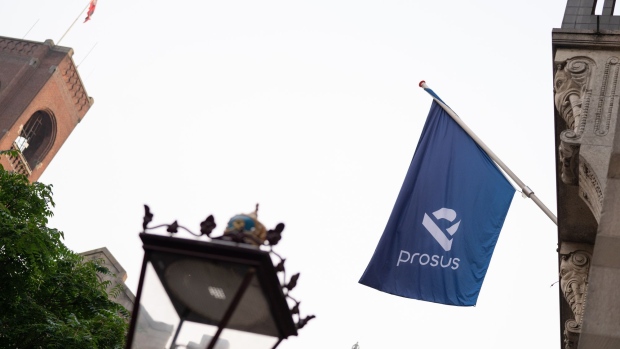 A Prosus flag is displayed ahead of the trading debut of the new Prosus NV unit of Naspers Ltd., outside the Amsterdam Stock Exchange, operated by Euronext NV, in Amsterdam, Netherlands, on Wednesday, Sept. 11, 2019. Naspers will retain 73% of the new company, which will house everything from a 31% stake in Chinese online giant Tencent to food delivery and advertising firms from the U.S. to India and Brazil. Photographer: Jasper Juinen/Bloomberg , Bloomberg

Naspers Ltd. investors will be able to swap their shares for those of its Dutch-listed unit, Prosus NV, in another effort to narrow a valuation gap with its Chinese affiliate Tencent Holdings Ltd.

The swap is likely to more than double the number of Prosus shares available for trading, making the stock more liquid and giving Prosus a stake of 49.5% in Naspers, the parent company said in a statement on Wednesday.

The move is likely to boost the profile of Prosus, the holding company Naspers created in 2019 to diversify away from South Africa and give investors more direct exposure to its broad portfolio of tech businesses.

Naspers has tried for years to achieve a valuation greater than the sum of its parts and stop being seen as merely a proxy for investing in WeChat-creator Tencent. Cape Town-based Naspers was an early-stage investor in Tencent and has gradually been eclipsed by the Chinese business’s soaring valuation.