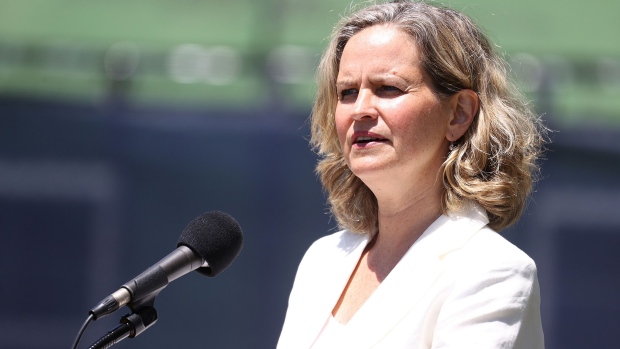 (Bloomberg) -- Officials in Nassau County are sparring over how to allocate federal funding with the Democratic county executive suggesting direct payments to residents, and some Republicans are pushing back.

County Executive Laura Curran, who is running for re-election, filed an ordinance in the county legislature this week to appropriate $100 million of the county’s American Rescue Plan aid for one-time payments of $375 to qualifying households that have experienced financial hardship due to the pandemic.

“As we continue to recover from the pandemic, Nassau County is committed to delivering relief for our residents and businesses,” Curran said in the release on Monday. “I believe this assistance will not only help those who continue to struggle, but also provide a boost to our local economy.”

But Curran, a Democrat, is facing a major roadblock for the program. The county’s legislative body refused to bring the ordinance up for a vote at their monthly meeting, and the legislature isn’t due back in session until next month.

“The Majority will do its due diligence to make sure taxpayers are protected,” Presiding Officer Richard Nicolello, a Republican, said in an emailed statement. “At the same time, Majority Legislators are committed to meaningful and enduring tax relief, such as the $9 million in tax cuts that we proposed and the County Executive vetoed.”

Curran said in a statement that she was “deeply disappointed” with the legislature’s decision to stall the vote.

“We encourage the Majority to call a special meeting in August so that we can fast-track aid payments to lower- and middle-income households, address the needs of renters, and reach the largest possible number of households with relief,” said William Biamonte, chief of staff for the county legislature’s minority caucus.

Deputy Presiding Officer Howard Kopel said he plans to vote against Curran’s plan, calling the program an irresponsible use of federal funds.

“The money could be directed elsewhere, whether it is to pay off debts, or improve the roads, or any other any number of county needs that are critical for the residents,” he said. “$375 is not a night at a good restaurant, but it’s not much more than that for most people.”

The Long Island County with about 1.35 million residents will receive $385 million in total ARP funding.