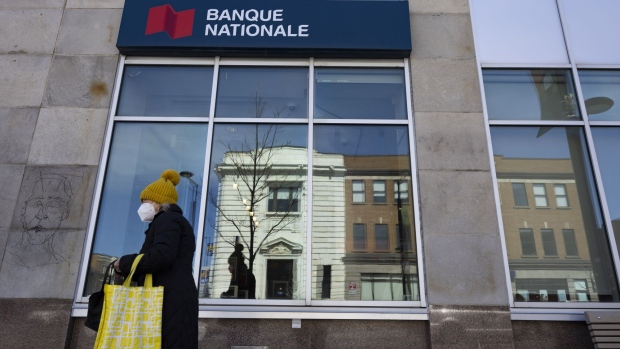 A National Bank of Canada branch in Montreal, Quebec, Canada, on Thursday, April 28, 2022. Five Canadian banks had their price targets cut an average of 6% at RBC Capital Markets on prospects that escalating macro risks could weigh on profits. , Bloomberg

(Bloomberg) -- National Bank of Canada’s fiscal second-quarter results got a boost from a surge in trading as recession fears roiled markets.

Escalating concerns that global central banks’ aggressive rate increases will hurt the economy have hammered equity and bond markets this year. While that has put a chill on financing transactions, it has caused a surge in trading volume that has benefited firms like National Bank. The company’s trading revenue rose 40% to C$349 million.

National Bank shares have fallen 1.6% this year, compared with a 3.6% drop for the S&P/TSX Commercial Banks Index.

Also in the earnings release: