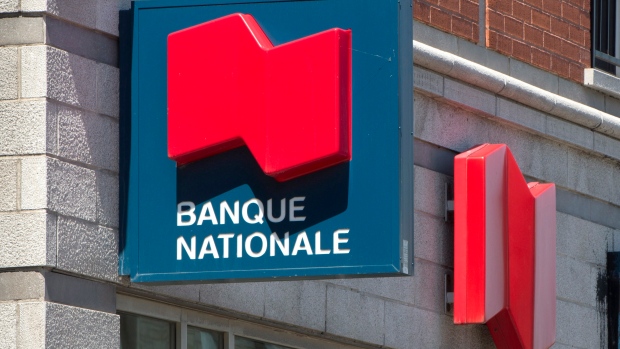 A National Bank sign is seen Monday, May 30, 2016 in Montreal. National Bank of Canada raised its quarterly dividend as it reported its fourth-quarter profit rose to $604 million compared with $566 million in the same period a year ago. , THE CANADIAN PRESS/Paul Chiasson

MONTREAL -- National Bank of Canada took a charge relating to a tax-fraud investigation but nonetheless topped expectations, reporting a 10-per-cent profit jump in its latest quarter.

The Montreal-based bank revealed Thursday that it had incurred a charge of three cents per share related to Maple Financial Group Inc., a financial services business in which National Bank has a 24.9-per-cent equity interest.

Since September 2015, German prosecutors have been investigating the trading activities of Maple subsidiary Maple Bank GmbH between 2006 and 2010 for suspected violation of tax laws.

National Bank says there has yet to be a "determination of tax fraud" on the part of Maple, which has since filed for bankruptcy, but the bank took the charge anyway.

The news came as National Bank reported its first-quarter earnings, which chief executive Louis Vachon said was boosted by several parts of the bank.

"Our performance was driven by continued growth in all business segments, disciplined cost management and strong credit quality," he said.

The bank reported a profit of $610 million in its latest quarter, up from $552 million in the same quarter a year earlier.

Excluding specified items, National Bank says it earned $1.70 per diluted share for its latest quarter, up from $1.50 in the same quarter a year earlier.

Analysts on average had expected an adjusted profit of $1.66 per diluted share, according to financial markets data firm Refinitiv.

The earnings caused the bank's stock to tumble by nearly 3 per cent to reach $70.93 in afternoon trading.

Looking forward, Vachon said the bank would be "closely monitoring" the recent novel coronavirus outbreak, which has spread to 13 Canadians and tens of thousands more around the globe.

"We think that the coronavirus, if the impacts continue, will be felt first through performing and in the non-retail sector of the portfolio," he said.

The bank has made some "adjustments" because of the potential impact, but Vachon cautioned, "It's still fairly early to try to assess what the final impact will be of the coronavirus."

Bank of Montreal, Bank of Nova Scotia and Royal Bank of Canada also said when they reported their results that they have yet to see an impact from the outbreak, but are keeping an eye on the situation.