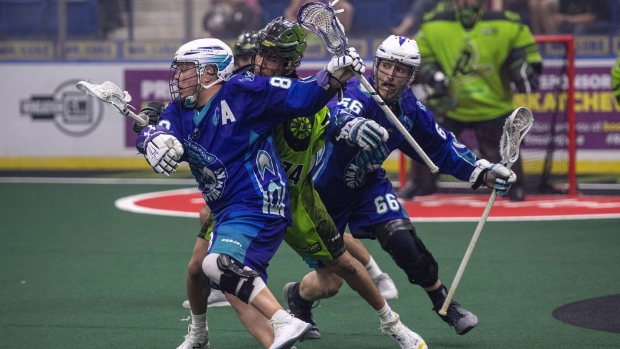 Rochester Knighthawks forward Cody Jamieson moves the ball past Saskatchewan Rush transition Jeremy Thompson during the third quarter of game one of the National Lacrosse League finals in Saskatoon, May 26, 2018. The Canadian Press/Liam Richards

The National Lacrosse League is the latest U.S. sports association to embrace gambling.

The league is teaming up with Roar Digital, a joint venture between MGM Resorts International and GVC Holdings Plc, to let users bet on games — a deal the companies described as a first for the sport of lacrosse in the U.S.

Since the U.S. Supreme Court legalized sports gambling nationwide in 2018, leagues have been partnering with casino and betting companies to get a piece of a fast-growing market. Fourteen states have begun allowing bets, and six others are preparing to do so.

The burgeoning interest in lacrosse should bring an eager customer base to the partnership, NLL Commissioner Nick Sakiewicz said in a statement. The indoor lacrosse league has 13 teams across North America, including New York, Philadelphia and San Diego, and attracts a more affluent demographic than most other sports.

“The growth of our league as a sports and entertainment property and the amount of engagement we will be able to generate through this innovative partnership with MGM Resorts and Roar Digital will be very exciting,” he said.

--With assistance from Christopher Palmeri.