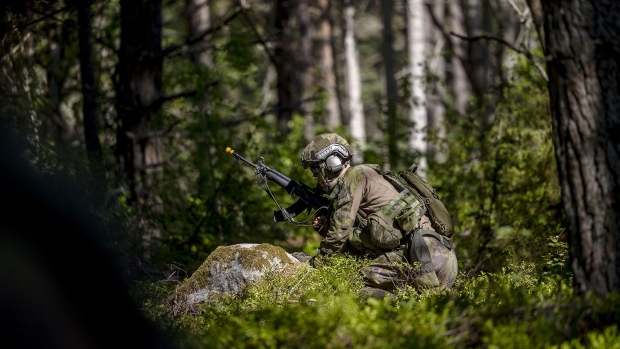 A soldier performs during the Baltic Operations NATO military drills (Baltops 22) on June 11, 2022 in the Stockholm archipelago, the 30,000 islands, islets and rocks off Sweden's eastern coastline. Fourteen NATO allies and two NATO partner nations, Finland and Sweden, are participating in the exercise with more than 45 ships, 75 aircraft and 7,500 personnel. , Photographer: Jonas Gratzer/Getty Images

(Bloomberg) -- NATO leaders formally invited Sweden and Finland to join the military alliance and agreed to sign their accession protocols, propelling the bids from the Nordic countries forward after weeks of stalling by Turkey.

The leaders welcomed a memorandum agreed by Turkey, Sweden and Finland late Tuesday that led to Ankara lifting its block on the countries’ bids to join. Turkey had concerns the two Nordic nations didn’t do enough to tackle Kurdish groups it views as terrorists.

NATO leaders warned they face “systemic competition” from China, which challenges the alliance’s “interests, security, and values and seek to undermine the rules-based international order.”

They also said Russia was “the most significant and direct threat” to allies’ security, and accused it of intentionally worsening a food and energy crisis. They reiterated calls for Russia to immediately stop its war in Ukraine.

The leaders are planning to overhaul and boost the alliance’s defenses in the face of Russian aggression in Europe, including establishing a new force model that would put about 300,000 troops on high alert to deal with any future threats.