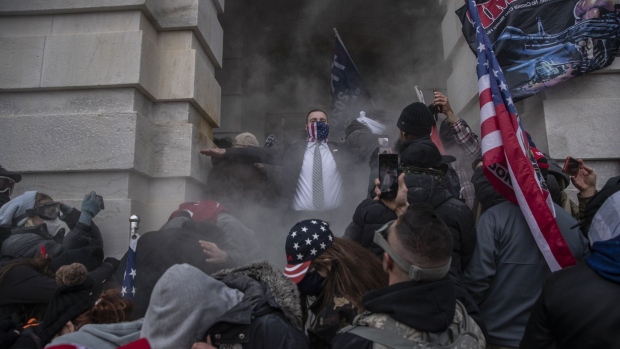 Demonstrators attempt to breach the U.S. Capitol after they earlier stormed the building in Washington, D.C., on Jan. 6. , Bloomberg

(Bloomberg) -- The head of the NATO military alliance warned that democracy is weakening around the world, citing the Jan. 6 insurrection at the U.S. Capitol.

Jens Stoltenberg, secretary general of the 30-nation North Atlantic Treaty Organization, said Tuesday in a speech before a two-day meeting of the group’s foreign ministers in Riga that “there are extremists and political groups within our own countries that do not respect our democratic values.”

“We saw a stark example of this on the 6th of January when the U.S. Congress was attacked with the aim to impede a peaceful transition of power,” Stoltenberg said. “Worldwide, democracy is in decline and there is less trust in democratic institutions.”

“So more than ever we need to demonstrate the strength of our democratic model and protect our values abroad and at home,” Stoltenberg said.

Among the issues to be discussed by the foreign ministers are the Russian military build-up near the border with Ukraine, preparations for a new NATO strategic outlook, how this fits in with the European Union’s draft blueprint and lessons learned from the Afghanistan pullout.

Stoltenberg cautioned that competitors of NATO nations “are investing heavily in our critical infrastructure as a way to interfere in our societies and using our dependence on essential supplies to further their interests.”

“In Europe we need the gas to flow from Russia to keep warm and prevent an energy crisis. And we need the rare Earth supplies from China to use our smart phones and computers,” he said.

Stoltenberg set out the threat posed by China in his speech and in later remarks. “The Chinese Communist Party is using its economic and military might to coerce other countries and control its own people, expanding its global footprint from Africa to the Arctic, in space and in cyberspace,” he said.