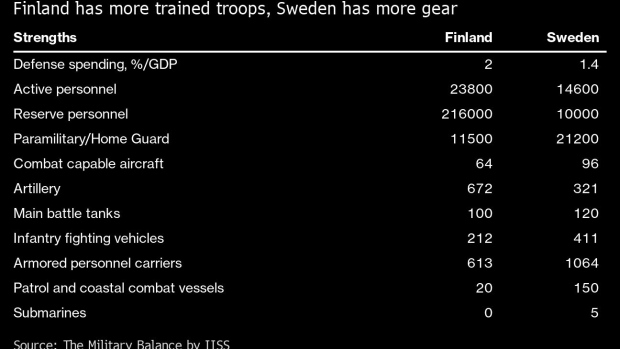 NATO members rallied around Finland and Sweden on Sunday after they announced plans to join the alliance, marking another dramatic change in Europe’s security architecture triggered by Russia’s war in Ukraine.

Gathering in Berlin over the weekend, most NATO foreign ministers embraced the bloc’s northern enlargement, a process that requires unanimity among the 30 allies. The one country to voice concerns was Turkey, with Foreign Minister Mevlut Cavusoglu unhappy that Finland and, particularly, Sweden have had relations with Kurdish militants who have been active in eastern Turkey.

Sweden is sending a team of diplomats to Ankara for talks this week and NATO Secretary General Jens Stoltenberg said he expects to work through the last-minute wrinkles in the enlargement plan.

“Turkey has made it clear that their intention is not to block membership,” Stoltenberg told reporters in Berlin. He said he was confident Turkey’s concerns won’t delay the membership procedure, and that his aspiration “is still to have a quick and swift process.”

Governments in Helsinki and Stockholm are set to deliver their formal applications at NATO’s headquarters in Brussels later in the week once their respective parliaments have signed off.

Turkey caused a late tremor of anxiety for the two new applicants on Friday when it suddenly called attention to what it called their support for Kurdish “terrorists.” President Recep Tayyip Erdogan’s government had previously indicated that it would take a favorable view of their candidacy.

Turkey has long complained of insufficient cooperation from NATO and European allies in its fight with the Kurdistan Workers’ Party, or PKK, which is classed as a terrorist organization by the US and European Union, and the YPG, a related group that mainly operates in Syria.

“Turkey has conveyed its concerns during the NATO expansion meeting,” Cavusoglu told reporters in Berlin. “To be specific, representatives of these two countries were holding meetings with PKK and YPG members and Sweden was also providing weapons.”

US Secretary of State Antony Blinken said he’s “very confident” the allies will agree to back the expansion. Canada’s foreign minister, Melanie Joly, said “the opportunity is greater than any bilateral issues” and called for a fast process to admit the applicants.

The move is another plank in the transformation of the European security landscape after Russia’s attack on Ukraine prompted Germany to abandon its postwar reticence over defense spending and embark on a massive revamp of its military.

“It’s hard to imagine a bigger shift in the security environment than our neighboring country attacking a nation of 40 million people to violently overthrow its government,” Finnish Foreign Minister Pekka Haavisto said on Sunday.  “That demonstrated to us that the security architecture we’ve relied upon in Europe, such as the Organization for Security and Cooperation in Europe, did not work and was not able to prevent war.”

In Finland and Sweden, the Feb. 24 invasion prompted a shift in public opposition to NATO membership almost overnight, despite Russia warning that they could face consequences.

Once the formal applications have been submitted, NATO has to decide whether to consider the request. It will then hold talks with the countries on their obligations as members before the NATO council signs a potential accession protocol. The lengthiest step is ratification by the 30 national parliaments and the whole process could take as long as a year.

Stoltenberg said NATO would look at ways to protect the two countries while their application is being ratified.

At the end of that process, NATO is getting two sophisticated, modern militaries with equipment that’s already compatible with the gear used in the bloc, and an improved ability to defend the three Baltic states -- Estonia, Latvia and Lithuania. Finland guards a border with Russia roughly 1,300 kilometers (800 miles) long, has a reserve of 900,000 troops and is able to deploy 280,000 of them in war time. It’s held on to a conscription-based system where most men and some women undergo military training lasting from six months to a year.

The two have been partners and trained with NATO forces in the past, while remaining outside the scope of its collective security guarantees. German Foreign Minister Annalena Baerbock on Sunday went as far as to say they are already de-facto “NATO members, just without membership cards.”