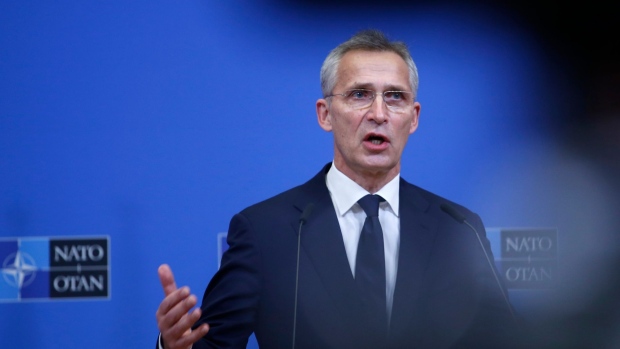 Jens Stoltenberg, secretary general of the North Atlantic Treaty Organisation (NATO), speaks at a news conference following a meeting with Olaf Scholz, Germany's chancellor at the NATO headquarters in Brussels, Belgium, on Friday, Dec. 10, 2021. German Chancellor Olaf Scholz said a Russian invasion of Ukraine would trigger reprisals, the latest warning to President Vladimir Putin from Western leaders, though he declined to specify if halting the Nord Stream 2 gas pipeline would be part of any response. , Bloomberg

(Bloomberg) -- Jens Stoltenberg, secretary general of NATO, signaled he will step down when his term ends in early October, despite reports that several of the military alliance’s member states have urged him to stay on.

The U.S. and Germany are among the countries that have asked Stoltenberg, who is leading the alliance’s talks with Russia over its military buildup near Ukraine, to remain in the job, Norwegian newspapers have reported without citing anyone. Stoltenberg, whose mandate has already been extended, is vying for the job of Norway’s next central bank governor, though he has pledged to serve out his term at NATO.

Stoltenberg is set on leaving the job at the start of October. Asked to comment on the report, a NATO official who declined to be named on a confidential matter, said that Stoltenberg’s term expires on Oct. 1, and that it’s up to the 30 members of the North Atlantic Treaty Organization to appoint a secretary general.

The process for picking a successor to Stoltenberg is expected to start over the next couple of months, with the first step taken by the dean of ambassadors to NATO convening initial discussions. Member states then put forward candidates, triggering a long period of lobbying. With a NATO summit due in Madrid in June, a successor could be picked in time for the new chief to take part as an observer.

Possible contenders touted in Brussels include a southern European such as Portuguese Prime Minister Antonio Costa or Italian ex-premier Enrico Letta, as well as Belgian Foreign Minister Sophie Wilmes. A candidate from a Baltic state could face difficulties as he or she could be seen as too provocative in handling relations with Russia, the official said.