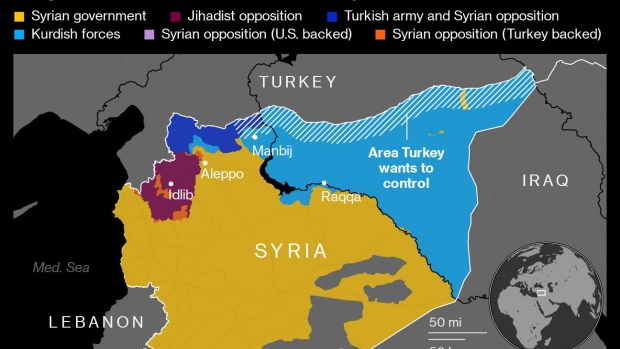 (Bloomberg) -- European Union leaders will discuss sanctions against Turkey at a summit next week in protest against President Recep Tayyip Erdogan offensive in northern Syria.

The Turkish operation has provoked criticism from the U.S., the EU and some Arab states and Erdogan has threatened to “open the doors” to Europe for 3.6 million refugees currently sheltering in Turkey.

NATO’s Stoltenberg Says Captured IS Militants Must Not Escape (12:15 p.m.)

“Captured Daesh terrorists must not be allowed to escape,” NATO Secretary-General Jens Stoltenberg said in Istanbul on Friday, using an alternative name for Islamic State. “I expect Turkey to act with restraint” in its cross-border operation, he said.

Turkish Foreign Minister Mevlut Cavusoglu, who was speaking at a joint press conference with Stoltenberg, said it was out of question for Turkey to release Islamic State detainees inside the buffer zone that Turkish troops will create.

European Council President Donald Tusk reiterated the EU’s opposition to the Turkish incursion, and said Erdogan’s threat to release refugees into the continent was “blackmail” and “totally out of place.”

“Turkey must understand that our main concern is that their actions may lead to another humanitarian catastrophe, which would be unacceptable,” Tusk told reporters in Nicosia, Cyprus. “Nor will we ever accept that refugees are weaponized and used to blackmail us.”

The EU has frozen negotiations on Turkey’s longstanding bid to join the bloc -- a reaction partly to Erdogan’s crackdown on domestic opponents -- and has stepped up criticism of Turkish energy exploration in disputed waters around Cyprus.

At the same time, the EU is counting on the Turkish government to uphold a March 2016 agreement that stemmed a flood of Mideast refugees into the bloc via Greece. The EU pledged 6 billion euros to help Turkey handle refugees as part of the accord.

The EU has repeatedly called on Turkey to halt its military offensive in Syria, citing the risks of greater instability in the region.

“The Turkish operation into northeast Syria could open a new, dramatic, chapter in the already very dark history of the Syrian war,” EU foreign-policy chief Federica Mogherini told the European Parliament on Wednesday in Brussels.

EU foreign ministers will discuss the situation at an Oct. 14 meeting in Luxembourg.

Sanctions against Turkey will be debated next week at the European Union leaders’ meeting, France’s EU affairs minister Amelie de Montchalin said. The leaders will gather in Brussels on Oct. 17.

“You can imagine that we are not going to stick to words around the table,” she said, adding that “all the talks” will take place next week when asked whether Turkey’s NATO membership should be suspended. She spoke on France Inter radio.

Turkey’s Defense Ministry said 277 fighters of the Kurdish militant group YPG have been killed since the operation began, a claim that was impossible to verify independently. The ministry said a Turkish soldier was also killed during clashes.

Mortar attacks by the YPG from areas under its control in Syria killed seven civilians in southeast Turkey, including a 9-month-old baby of a Syrian refugee family, the state-run Anadolu Agency said.

President Trump said the U.S. has three options in dealing with Turkey’s incursion into northern Syria: send the American military back in, unleash punishing sanctions on Turkey or mediate between the two sides.

The United Nations Security Council held an emergency closed-door session on Turkey’s incursion into Syria. Afterward, a group of European ambassadors called upon Turkey to “cease the unilateral military action,” adding that “renewed armed hostilities in the northeast will further undermine the stability of the whole region.”

“It is unlikely that a so-called ‘safe zone’ in north-east Syria, as envisaged by Turkey, would satisfy international criteria for refugee return,” the diplomats from the U.K., Belgium, France, Germany and Poland said.

Kelly Craft, the U.S. ambassador to the UN, refrained from criticizing Turkey’s incursion even as she made it clear the U.S. doesn’t endorse it either.

“Failure to play by the rules, to protect vulnerable populations, failure to guarantee that ISIS cannot exploit these actions to reconstitute, will have consequences,” Craft said.

Erdogan said he would “open the doors” for 3.6 million Syrian refugees currently in Turkey to seek shelter in Europe, should EU members continue their attacks on his country.

During a speech to the ruling party officials in Ankara, Erdogan hit back at countries such as Saudi Arabia and Egypt, which criticized Turkey’s military advance into northeastern Syria. The president warned the European Union against labeling the operation as a form of “invasion” and threatened to unleash a wave of refugees otherwise.

At least 19 Kurdish militants were killed since the Turkish assault began and 38 wounded, according to U.K.-based Syrian Observatory for Human Rights, which monitors the eight-year Syrian war through activists on the ground.

According to Erdogan, Kurdish forces lost 109 members over the past day and many more were wounded.

Turkey Cracks Down on Dissent Amid Operation (11:03 a.m.)

Turkey expanded its crackdown on criticizing the government for its decision to begin a new offensive into Syria. An investigation was launched against five lawmakers of pro-Kurdish party HDP, including its co-chairs Sezai Temelli and Pervin Buldan.

Hakan Demir, an editor at daily Birgun newspaper, was detained by police over accusations that he was inciting hatred with his social media postings.

Turkey’s police force cracked down on social-media content that it says went against the military operation in Syria. A total of 78 people faced legal action but it wasn’t clear if anyone was immediately detained.

The posts represented incitement to “hatred,” police said on its website, and accused the posters of engaging in “propaganda of a terrorist organization.” The charges carry years in prison if upheld in a court.

“There is no U.S. airspace over there, there is international airspace. It is Syria’s airspace. Thus, the decision belongs to the regime,” Erdogan told reporters on his way home from Serbia late Tuesday, according to newspaper Haberturk. He said a 1998 treaty gave Turkey authority to use that airspace to target groups Turkey views as terrorists.

Two U.S. defense officials said the U.S. and Turkey are no longer exchanging intelligence or coordinating air sorties in the region. One of the officials, who asked not to be identified, said the U.S. was told Turkish planes were incoming and that the U.S. needed to get its forces out of harm’s way.

--With assistance from Helene Fouquet, Jonathan Stearns and Richard Bravo.

To contact the reporters on this story: Selcan Hacaoglu in Ankara at shacaoglu@bloomberg.net;Taylan Bilgic in Istanbul at tbilgic2@bloomberg.net