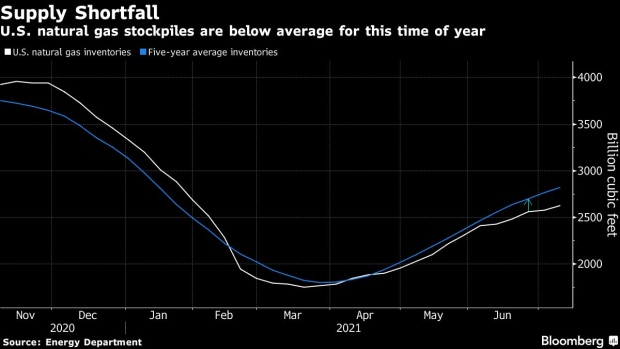 (Bloomberg) -- Natural gas futures soared to $4 per million British thermal units in the U.S. for the first time since December 2018 as summer heat intensified concerns about tight supplies later this year.

Gas for August delivery jumped to as much as $4.001 per mmbtu on the New York Mercantile Exchange and traded at $3.991 at 1:22 p.m. The premium for March 2022 gas over April futures -- essentially a bet on how undersupplied the market will be at the end of next winter -- reached 63.6 cents, the highest on record.

Prices for the fuel are soaring across the globe as scorching weather stokes demand for electricity to run air conditioners. In the U.S., however, the rally is also underpinned by concern about a potential supply shortfall in the winter, when gas consumption peaks as homes and businesses crank up the heat. Stockpiles are already below normal for the time of year, and production growth has been restrained as drillers heed investor calls for capital discipline.

Exports are also contributing to tight supplies. In May, the U.S. shipments of liquefied natural gas exceeded Australia’s for the first time ever as buyers around the world continued to purchase record amounts of the super-chilled fuel. The next month, gas deliveries to Mexico from the U.S. via pipeline also reached an all-time high.

U.S. gas in underground storage is 6.2% below normal for the time of year, government data show.