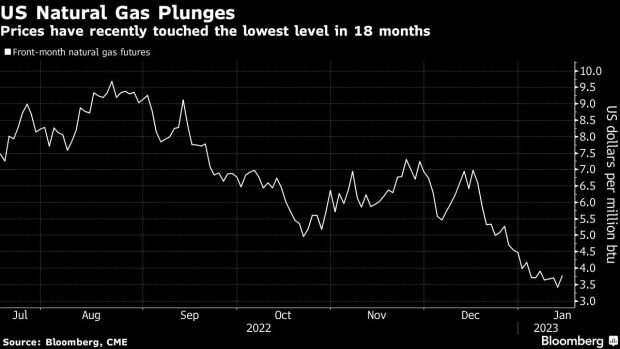 (Bloomberg) -- A plunge in natural gas prices will slow supply growth in the US this year, according to the country’s biggest producer of the fuel.

Gas futures have dropped in the US and Europe in recent weeks, largely because of abnormally warm winter weather. US production has also continued to increase.

Predictions among some in the industry that US output will rise this year by another 3 billion cubic feet a day, or roughly 3%, will probably turn out to be incorrect, according to Toby Rice, Chief Executive Officer of EQT Corp.

“That’s a little ambitious with the current pullback and prices,” he said in an interview over the weekend. “You are going to see an operator response and slow down in the activity levels.”

US prices have fallen 16% this year to $3.75 per metric million British thermal units. They were almost double that as recently as late November.

The disruption to global flows caused by Russia’s invasion of Ukraine and decision to cut supplies to Europe means gas will continue to whipsaw in the medium term, Rice said.

“It’s been a little bit over-sold,” he said in Abu Dhabi, capital of the United Arab Emirates, where he was attending an Atlantic Council conference. “But this is the world we’re going to be living in — a significant amount of volatility, especially when we are energy-short.”

Another problem for gas firms is that inflation in the industry is still high, making it expensive to hire drilling workers and equipment.

“Inflation has not reacted,” Rice said. “So, we’ve got a couple big forces that are working against producers.”

He reiterated that a shortage of pipelines in the US exacerbates the company’s ability to raise production. Environmental activism has led to several pipelines being delayed or canceled in the past five years.

“The gas markets in the US are broken,” he said. “And what’s broken is lack of pipeline infrastructure that connects the low cost supply that we have with the demand. We still see pockets in the US where natural gas prices are higher than what they’re paying in Europe. It’s crazy.”

European prices are around $21 per mmbtu, even with their recent drop. That’s more than five times the cost of benchmark gas in the US.

Gas should be seen as a clean source of energy as not lumped together with oil and coal, said Rice. While gas is cleaner than those two, it still emits carbon when burned and methane leaks are common in the industry. Many climate activists are against its use and say governments should phase it out as a fuel for generating electricity and heating homes.

The US government’s climate envoy, John Kerry, said to Bloomberg on Sunday that gas can play a role in slowing the planet’s warming, but only if producers accelerate efforts to capture their carbon emissions.

With more pipelines, the US has the potential to eventually increase gas exports six-fold to 60 billion cubic feet daily, Rice said.

“That is the energy equivalent of adding 10 million barrels a day of clean energy to the world stage,” he said. It would allow the US to be the “swing producer for energy” markets, he said.

EQT has no plans to tap the bond market again following a $1 billion deal in September, which helped fund the acquisition of competitor THQ Appalachia I LLC. The company will look to raise its shareholder payouts further, according to Rice.

“We are going to be a dividend grower over time,” he said.