U.S. natural gas prices soared the most in more than a year, erasing much of a recent decline, as end-of-month trading boosted volatility and forecasts for chillier weather revived concerns about tight supplies.

Henry Hub gas for November delivery gained 11.7 per cent, the biggest gain since September 2020, to US$5.898 per million British thermal units. Prices are bouncing back from recent declines, though they’re still shy of 12-year settlement high reached earlier this month. Traders were closing out bearish positions before November options expire on Tuesday.

While mild October weather allowed producers to inject more gas into storage than usual, forecasts for a cooler early November in the Midwest and East are a reminder that supplies of the heating and power-generation fuel are still below normal. Meanwhile, the U.S. is expected to export every molecule it can to help ease shortages of gas in Europe and Asia.

“There is terrific concern about sufficiency of supply”, said John Kilduff, founding partner at Again Capital, adding that the market remains sensitive to any cold forecasts.

One sign of growing supply fears: The so-called widowmaker spread between March and April futures, essentially a bet on how tight inventories will be at the end of winter, widened to US$1.468, the highest since Oct. 6. 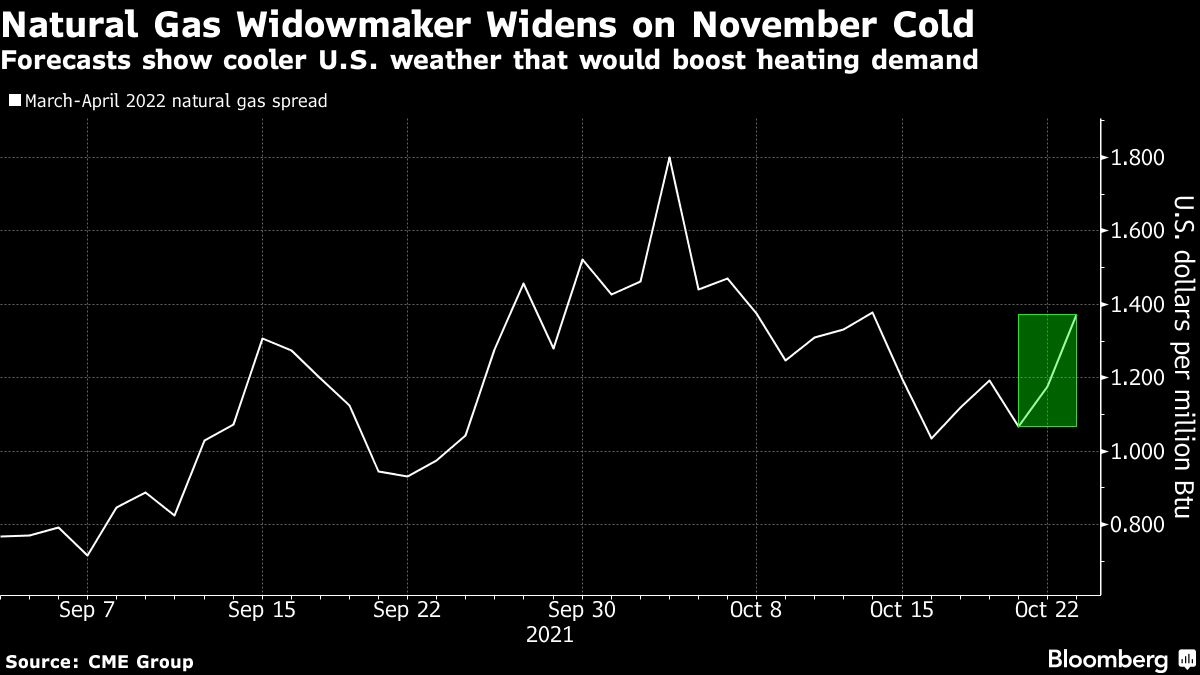 Globally, natural gas prices have surged to records amid escalating tension about tight supplies as winter approaches in the Northern Hemisphere. While the U.S. is relatively insulated from the energy crisis engulfing China and Europe -- where gas prices are now five times higher than Henry Hub prices -- booming demand for the nation’s liquefied natural gas overseas is adding to concern about domestic inventories.

Flows to liquefied natural gas terminals are seen at 11.3 billion cubic feet on Monday, up by more than 10 per cent since Friday and the highest since May, according to BloombergNEF. Estimated volumes at Freeport LNG in Texas have rebounded after the terminal, one of the U.S.’s largest, faced issues with a wax buildup in its pipelines last week.

Monday’s rally has pushed prices outside the top end of what Gary Cunningham, director of market research at Tradition Energy, sees as the fair-value range for the commodity.

“We really think this is sort of overdone on the market right now,” Cunningham said, adding that the gain is not fully supported by the weather forecasts. “We do see it driven more by speculation than anything else.”

Hedge funds had slashed wagers on higher gas prices to the lowest since June as of Oct. 19, according to data released Friday by the Commodity Futures Trading Commission and compiled by Bloomberg. Gas for November delivery rose above the moving average for the past 20 and 30 days, a technically bullish signal that typically triggers additional buying.